A major offshore discovery could lead Egypt to fully supply itself with natural gas by 2021.

Deposits in the massive offshore Zohr field in the southeast Mediterranean are estimated at 30 trillion cubic feet, which would provide Egypt with 10 years’ worth of natural gas, industry analysts say. 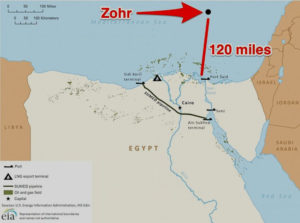 The Zohr field was discovered by Italy’s Eni in 2015.

In June 2016, BP and Eni discovered a new gas deposit in the Baltim South area, 6 miles north of the Nooros area. In September, BP reached a record output level at the Nooros area of 700 million cubic feet per day and is expecting further growth of production to 880 million by the start of 2017.

Eni and BP signed three agreements with Egyptian authorities in September to conduct oil and gas exploration activities in the Nile Delta worth $595 million.

Egypt, which is also inviting companies from Asia and North America into its energy sector, has signed some 70 fossil-fuel-exploration agreements with international firms with a total worth of around $15 billion.