Nonprofit groups in New Jersey which focus on Sexual Risk Avoidance Education, also known as “abstinence education,” are now required by the New Jersey Department of Health to participate in a “youth development” training program in which Planned Parenthood plays a prominent role.

Sources told WorldTribune.com that the New Jersey Department of Health is requiring the SRAE groups to allocate a portion of federal grants they receive to send representatives to a “Youth Advisory Board” at which Planned Parenthood provides guidance on such topics as “How Do You Know When You’re Ready to Have Sex?” 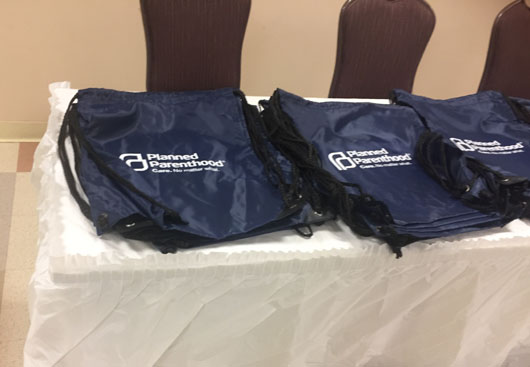 Several nonprofit groups in New Jersey receive Title V Abstinence Education Program grants distributed through the New Jersey Department of Education. “One year ago we were informed that we had to allocate part of the grant for a Youth Advisory Board of 5-10 youth involved in our programs who would participate in state level training,” a source said.

Materials distributed at a July 2 Youth Leadership Training seminar at Brookdale Community College in Lincroft included a Planned Parenthood brochure which asked “do I have condoms and/or dental dams – and know how to use them?”

“This is particularly problematic since they are involving programs that have the goal of empowering youth to AVOID sexual activity, not learn how to do it “better.” Also Title V programs are prohibited by federal law from promoting the use of contraceptives.” a source said.

An adult coordinator for a SRAE nonprofit said adults were separated from the youth they brought to the July 2 seminar and were not informed about what was discussed in a “private” meeting of youth and the Youth Advisory Board (YAB) trainers.

“It also was uncomfortable for many of us to have the youth left in our charge by their parents to be herded into a separate room away from us,” the coordinator said. “The explanation was that it would keep the adult coordinators from ‘hovering’ over their teens. No one I spoke to had any idea what was meant by this as none of the trained adults there saw their role as ‘hovering’ over anyone.”

The coordinator continued: “Also, this strategy was never discussed with the attending program coordinators. It would have been more effective to include us by having us sit at tables in the back that were designated for us when we arrived. This way we could carry on the momentum created by continuing the conversations they had. There also was never any explanation as to what was discussed in the ‘private’ meeting with our teens. We felt distrusted and treated as outsiders.”

In a letter to Youth Advisory Board members, the New Jersey Department of Health’s Child and Adolescent Health Program said the seminar would “allow YAB members to connect with peers in a comfortable and safe setting to talk about issues that are affecting communities throughout the state. The goal is for YAB members to have a meaningful experience while securing the skills to be effective leaders.”