The attorney general’s office in New Hampshire ordered the state’s Democrat Party to immediately stop sending out mailers that contain misleading information about voting by mail. 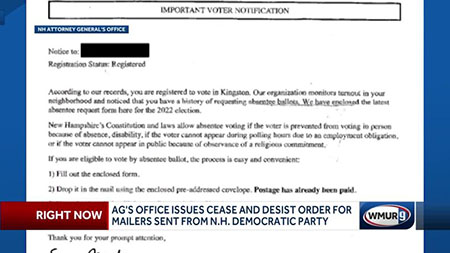 Attorney General John Formella, in a “cease and desist” letter to the legal counsel for the New Hampshire Democrat Party, said the mailers urging voters to request absentee ballot applications for the 2022 midterm elections provided the wrong addresses for city and town clerks and other errors that are “causing voter confusion and frustration” for voters.

With Joe Biden’s approval rating in the low 30s in New Hampshire, Republicans are hoping to flip two House seats and one Senate seats which are currently held by Democrats.

In the Senate, conservative Republican Don Bolduc is challenging Democrat Sen. Maggie Hassan in a contest that could help decide control of the U.S. Senate.

Formella ordered the Democrats to contact more than 900 voters in 39 cities and towns who received the incorrect mailers and to clarify any errors and explain what voters need to do to obtain an absentee ballot.

“The return mail addresses on the mailer are likely to mislead voters into intentionally violating (state law),” Formella wrote. “It could also disenfranchise some voters in that voters may complete absentee ballot applications believing that they will receive ballots for the general election, only to discover that their applications were never delivered to their town or city clerks.”

Formella said some voters who received the Democrat Party’s mailers were told that they “have a history of requesting absentee ballots” when they had never voted by mail in the past.

New Hampshire allows voters to cast absentee ballots ahead of state elections by mail if they will be absent from the town or city they live in on Election Day or are unable to show up to the polls because of a disability, illness, job, or religious observance.