New civil war over . . . bathrooms: Texas and a dozen states back North Carolina

Texas is among 13 states defending North Carolina’s law that determined people must use public restrooms based on their birth gender. 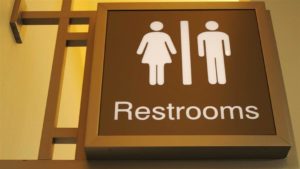 A federal judge in Texas ruled on Aug. 22 that the administration’s use of the word “sex” is wrong, declaring the term strictly to mean “the biological and anatomical differences between male and female students as determined at their birth.”

The states also argue the North Carolina proceedings should be halted temporarily because of that ruling and a Virginia case that the U.S. Supreme Court may hear.

The law requires transgender people to use restrooms corresponding to the sex on their birth certificates, not their gender identity, in schools and many public buildings.