Some 80 percent of priests working at the Vatican are homosexual and the more homophobic a cleric was, the more likely he was to be gay, according to the new book “In the Closet of the Vatican”. 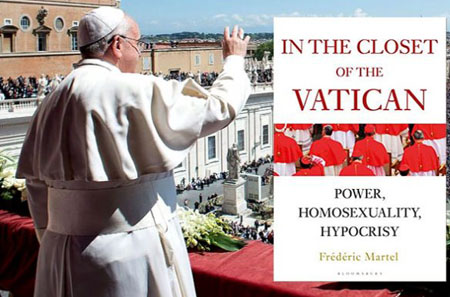 The book by French journalist and author Frederic Martel unveils “a clerical culture of secrecy which starts in junior seminaries and continues right up to the Vatican itself.”

The book, which will be available in eight languages across 20 countries, is being published on Feb. 26, coinciding with the opening day of a conference at the Vatican on sexual abuse, to which bishops from more than 100 countries will attend.

The timing of Inside the Closet’s publication has raised concerns that some may seek to conflate sexual abuse and homosexuality in the church.

In a letter to Pope Francis in 2015, Krzysztof Charamsa criticized what he called the Vatican’s hypocrisy in banning gay priests and said the clergy was “full of homosexuals.”

In December, Francis was quoted as saying: “The issue of homosexuality is a very serious issue that must be adequately discerned from the beginning with the candidates [for the priesthood]. In our societies it even seems that homosexuality is fashionable and that mentality, in some way, also influences the life of the church.”

According to a report on the Catholic website the Tablet, in his research for the book Martel conducted 1,500 interviews, including with 41 cardinals, 52 bishops and monsignors, 45 papal ambassadors or diplomatic officials, 11 Swiss guards and more than 200 priests and seminarians.

Martel alleges that one Colombian cardinal who held a senior Vatican position, the late Alfonso Lopez Trujillo, was defender of church teaching on homosexuality and contraception while at the same time using male prostitutes, the Tablet said.

Martel found that some gay priests accepted their sexuality and some maintained discreet relationships. But others sought high-risk casual encounters and some were in denial about their sexuality.