CNN and MSNBC unwittingly gave blanket, enthusiastic coverage to a November 2016 anti-Trump rally in New York City that was organized by the same Russian trolls who last week were indicted by special counsel Robert Mueller. 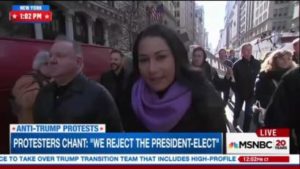 According to Mueller’s indictment:

So, which rally would CNN and MSNBC wind up covering?

Every hour between noon and 5 p.m. on Nov. 12, 2016, the two networks had live reports from the “Trump is NOT my President” rally.

On-scene reporters played up the idea that what turned out to be an event organized by Russian trolls was “a love rally,” and they trumpeted the protesters’ anti-Trump chants such as “We reject the President-elect.”

At one point, MSNBC anchor Alex Witt chimed in: “That woman, when she’s saying she’s concerned that black people will be shot in the street….Is that a legitimate concern for her? Because, that’s scary.”

Prior to the beginning of the protest, Witt had asked Radford: “Hey, Morgan, can you tell who has organized this rally?…Is there someone in charge here?”

Radford reported: “Right now, this is lots of different groups of people who have come together with no, necessarily, official leader, and that’s been some of the criticism.”

CNN’s Brynn Gingras reported that the protest was organized by “a 20-year-old student from St. John’s University here in New York….We’ve seen him several times shaking hands with police officers….It is the most organized protest that I’ve seen here in New York City.”

In a later report, Gingras said she had been “texting with the person, a 20-year-old college student here in New York City who organized this protest. I’ve been texting with him, and I asked, ‘Are you impressed with the size,’ and he says ‘It’s amazing what the collective voices can spread.’ ”