Nearly 26,000 dead people were on the Michigan voters rolls before and after the 2020 election, the president of the Public Interest Legal Foundation (PILF) said. 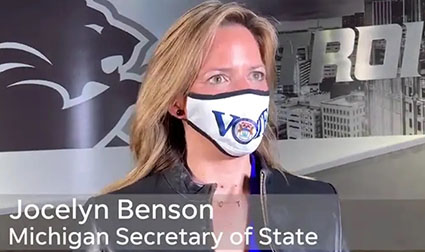 “That is nearly 26,000 opportunities for fraud and abuse,” Adams wrote.

“Most inexcusable and almost difficult to believe is that 3,956 have been dead for at least two decades,” Adams noted.

Adams said that PILF had warned Michigan Secretary of State Jocelyn Benson before the 2020 election that the state’s voter rolls contained a high number of dead registrants.

“This raised serious questions about the last time Michigan’s voter rolls had appropriately removed deceased registrants,” Adams wrote. “To help avoid a lawsuit later on, we pre-emptively hand-delivered the data to state officials in Lansing. Yet, Ms. Benson still did nothing to clean the voter rolls before the election or even afterward.”

Adams, a former Department of Justice attorney and current commissioner on the United States Commission for Civil Rights, noted that, in its investigation, PILF “found the obituary and tombstone of a deceased registrant who, if alive today, would be 108 years old. She died in May 2000. It is indefensible that someone who has been dead for over two decades could possibly remain active on any state’s voter rolls.”

Adams added: “Despite claims from the Left that there is no proof of voter fraud, many people may be surprised to learn that a significant number of these registrants had post-death voting credits in 2016, 2018 and 2020. After what happened in 2000, that only 528 votes decided the entire presidential election between George W. Bush and Al Gore, it is safe to say that one dead voter is too many.”