A radical activist legal organization that received over $1 million in funding from progressive globalist billionaire George Soros in 2018 alone has been cited by NBC News as a “nonpartisan” group whose reports are covered as straight news and whose staffers even host their own news segments for the network.

The leftist Brennan Center for Justice is named after Supreme Court Justice William Brennan, the man who is considered to be the intellectual father of the infamous Roe v. Wade decision that legalized abortion nationwide in 1973. Brennan championed a “living document” approach to interpreting the Constitution and his invention out of whole cloth of previously uncharted “rights to privacy” was the blunt object activist Court justices wielded to enact profound social change in America. 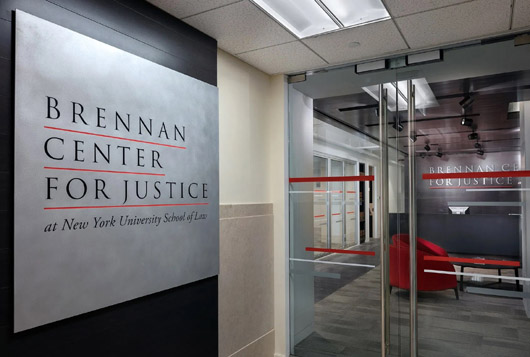 The Brennan Center fully echoes its namesake’s legacy. “The Brennan Center for Justice at NYU School of Law was founded 20 years ago as a living memorial to the values of the late U.S. Supreme Court Justice William J. Brennan, Jr.,” the group openly declares on its website. “Known for his expansive vision of the Constitution as a driver of social change and his belief in the transformative power of law, Justice Brennan inspired many reformers moved by the enduring American values of democracy, justice, freedom, and equality.”

It should be no surprise that NBC News casts such favorable shade on this activist organization. After all, Kimberley D. Harris, Executive Vice President of Comcast Corporation and General Counsel of NBCUniversal, sits on the Center’s Board of Directors.

“[A]s General Counsel of NBCUniversal, Harris provides legal advice to senior management team and oversees the legal function across all NBCUniversal divisions,” her official Comcast bio reads. “She reports to Comcast Chairman and CEO Brian Roberts and NBCUniversal CEO Steve Burke.” Harris is an Obama administration alum who served as “the principal Deputy Counsel and Deputy Assistant to the President in 2011,” the bio states.

NBCUniversal is the parent organization for NBC News.

This of course is a situation ripe for blatant conflict of interest, yet NBC News does not so much as bat an eye in its coverage of the Center. In July 2018, the network covered as straight news a Brennan Center report that “uncovered” alleged racial discrimination at state voter registries.

“Nine states with a history of racial discrimination are more aggressively removing registered voters from their rolls than other states, according to a report” by the Center, NBC’s lead sentence blared.

“After reviewing voter purges nationally from 2012 to 2016, the nonpartisan Brennan Center for Justice found that the mostly Southern jurisdictions that had once been required to get changes to voting policies pre-approved by the Justice Department had higher rates of purging than jurisdictions that were not previously subject to pre-clearance,” the second paragraph reads.

There is not the slightest disclosure to be found in the article of the close relationship NBCUniversal’s top counsel has with this radical legal organization or the fact that NBCUniversal is a financial donor to the Center.

In August of this year, the network posted a video on its news site titled “What is the 1994 crime bill?” The video, which NBC offers as a straightforward news segment, is presented by Lauren-Brooke Eisen. A chryon at the beginning of the video states that Eisen is a senior fellow and acting director of the Justice Program at the Brennan Center for Justice. The video was slanted toward a narrative that the ’94 crime bill led to a “mass incarceration” plague in America.

Totally left out of the video is any notification to viewers that Eisen is herself a committed activist who sees racism as a foundational sin in American history. In a Nov. 17 tweet Eisen praised and recommended a “phenomenal” article published at The Atlantic by Brennan Center comrade Wilfred Codrington that states the Electoral College was created to be an instrument of perpetual racism by our Founding Fathers:

Please read this phenomenal piece by my colleague @wuc3 where he writes, “Commentators today tend to downplay the extent to which race and slavery contributed to the Framers’ creation of the Electoral College, in effect whitewashing history.” Wilfred’s thread below 👇 https://t.co/hgGgswxn1p

Codrington’s article slams the Electoral College as an evil construct that intentionally leads to the “disempowerment of black voters.” “What’s clear is that, more than two centuries after it was designed to empower southern whites, the Electoral College continues to do just that,” the race-baiting Center fellow writes. “The race-consciousness establishment — and retention — of the Electoral College has supported an entitlement program that our 21st-century democracy cannot justify,” Codrington concludes.

This is hardly the only sign of radicalism at the Brennan Center. Here is Taryn Merkl, Senior Counsel at Brennan, boasting of her time teaching in prison alongside Kathy Boudin, the leftist Weather Underground terrorist who participated in a 1981 armed robbery that led to the murder of two police officers and a security guard.

The DA race in SanFran is finally decided for @chesaboudin-congrats! When I was in school @ColumbiaLaw, I had the privilege of teaching in Bedford Hills Corr. Facility with his mom Kathy Boudin, who taught me a lot too. Everyone in the system must strive for fairness and justice. https://t.co/SloiYwDCbK

Boudin’s son was just elected as the new District Attorney of San Francisco.

The Center is also a staunch advocate of abortion rights. In a nod to “The Handmaid’s Tale,” the notorious 1985 novel written by Margaret Atwood that is a particular favorite of radical feminist activists everywhere, the group titled a pro-abortion event it hosted after words in the Hail Mary prayer said by Catholics. This is in keeping with Atwood’s warped descriptions of a dystopian masculine-tyranny future dedicated to female fertility. “Blessed Be the Fruit: Threats to Reproductive Rights in 2019,” was the title of the event. “Women’s reproductive rights are under attack,” the Brennan Center description shouts out. “So far this year, nine states have passed laws to outlaw abortion or forbid the procedure past a certain point in pregnancy. The new laws are intentionally incompatible with Roe v. Wade. Far-right politicians hope to take their case to the Supreme Court, where the conservative majority appears more ready to reverse its ruling in Roe than ever before.”

Really nice “nonpartisan” legal center you got there, NBC.

Another Brennan Center “fellow” further highlights the cozy connection between the dominant media and leftist activist organizations. Dorothy Samuels is a Senior Fellow for the Center. Her official bio states that “[p]rior to joining the Brennan Center, Samuels served, for a record 30 years, as a member of the New York Times editorial board, writing on an array of legal and social policy issues, with a particular focus on the justice system, civil rights, and civil liberties.”

In a feverish article posted the same month Donald Trump was elected president, November 2016, Samuels unleashed all the progressive bile that undoubtedly served her so well for a “record 30 years” at the Times.

The Center is not just a think tank for opinionated authors, however. The organization actively works to enact social change via efforts to loosen or eliminate Voter ID laws, by pushing “automatic” voter registration, spurring on the effort to restore voting rights to convicted felons, striving to end “mass incarceration” and displaying unalloyed support for massive immigration.

Paasche is so arrogant about his company’s commitment to globalist ideals that he crowed in 2016 about PayPal pulling out of North Carolina due to that state passing a “bathroom bill” seen as “discriminatory” against transgenders and gushed about PayPal entering Cuba to do business in a communist state-controlled nation in the very same interview. Paasche wrapped both of these things together as if they were part of a common thread, which of course they are, saying, “PayPal’s value proposition is expanding.” That takes some gall.

The Brennan Center’s 2018 annual report lists dozens of corporate and philanthropic benefactors. In the highest category, “Over $1,000,000” is found Soros’s Open Society Foundations. Other progressive globalist foundations supporting the Center include the Ford Foundation, the Rockefeller Brothers Fundand the Tides Foundation.

The globalist manipulation of big-box media organs to help destroy the American nation state has been on full display in the Deep State impeachment coup against President Trump. Read here for more on that. But as can be seen with the tight relationship between NBC and a hardcore leftist legal center awash in Soros cash, the network is far deeper and more elaborate than most Americans realize. Which is unfortunate since it is all aimed at them.