During the White House transition period prior to Jan. 20, then-Attorney General William Barr put up several “roadblocks” to dozens of President Donald Trump’s executive orders while fast-tracking those of Joe Biden, according to Trump senior adviser Peter Navarro. 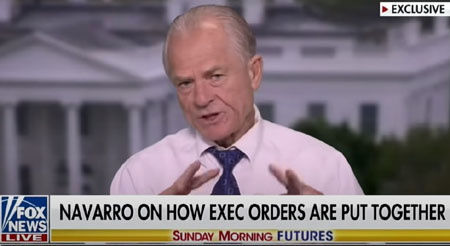 “We had over 30 executive orders queued after Election Day, ready to go, but we kept running into all these roadblocks and hurdles. It turns out that Bill Barr’s Office of Legal Counsel was fast-tracking all of these Biden EOs [executive orders], and basically, it was a Deep State coup,” Navarro said.

Navarro said he had worked on preparing more than 50 executive orders during his four years at the White House. The Department of Justice Office of Legal Counsel serves as the final checkbox in the process of determining whether the president has the statutory authority to set in motion what the contents of a given order call for.

“We got slow-walked at the Department of Justice, and this is a problem I told Barr about numerous times, and he should have been fired months before he was. By the last year of this administration, he was really working against this administration in a lot of ways,” Navarro said. “The bottleneck was at the Department of Justice on so many things we did.”