Davis Heller, a baseball player at North Greenville University in South Carolina, died on Oct. 5 from what reports are saying was “natural causes.” 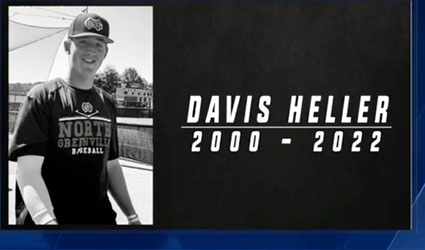 According to a news release from the South Carolina school, Heller’s death remains under investigation but “initial indications are that he died of natural causes.”

She said an autopsy was performed Thursday, but test results are not expected to be returned for 10 to 14 weeks. She said on Friday that Heller had no signs of trauma or injuries.

Heller, a first baseman, transferred to North Greenville University (NGU) this offseason after spending the 2021 and 2022 seasons with the University of Alabama.

“Our baseball program is heartbroken over the loss of an amazing human being and brother in Christ,” NGU coach Landon Powell said in the announcement.

“Davis was a positive force everywhere he went. A gentle giant who greeted everyone with a smile and constantly uplifted those around him. An example of what a great teammate should be, Davis has left a lasting legacy on this program. A great competitor, but even better friend to those who got to know him.”