National School Board Association has lost 17 states, 40 percent of its budget

Since it sent a letter to the Biden administration describing parents who oppose critical race theory and mask mandates as potential “domestic terrorists,” the National School Boards Association (NSBA) has lost 17 state school board groups and taken a devastating hit to its budget. 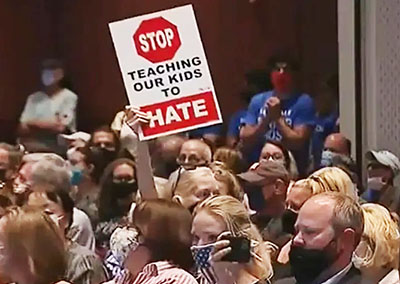 Along with the 17 state school board groups which have withdrawn from the NSBA, half of all groups in the country have downgraded their relationship with the headquarters, most citing disillusionment with the inflammatory language used in the letter. Annual dues from the 17 chapters accounts for 40 percent of NSBA member collections.

In an email to NSBA officials last month, Steve Gallon III, a Miami-Dade County school board member and chair of NSBA’s Council of Urban Boards of Education, said that the turn of events over the letter “has weakened a national voice for public education.” He said it “has caused further devastation to the already dangerously fragile financial position of NSBA in the loss of revenue in the millions” and “abated coordinated, national efforts around issues of educational equity,” according to emails obtained by Axios.

Some of the state group defectors are reportedly considereing forming an alternative to challenge the NSBA’s monopoly on school board affairs across the country.

“Given the NSBA’s new funding shortfall, such a proposal, pitched by Florida, Montana, and Pennsylvania’s groups, could potentially put the old institution out of business if the replacement attracts enough recruits and support,” National Review’s Caroline Downey noted.

The letter the NSBA sent to Attorney General Merrick Garland was seen by many of the state groups which left as a final straw after years of frustration with the organization.

The latest to leave, Alabama’s state affiliate, told Axios that significant problems at the NSBA long predated the controversy, which executive director Sally Smith described as merely “symptoms of that dysfunction.”

The official figure of lost income from state associations withdrawing is $1.1 million. A number of local boards have also cut ties with the NSBA in the wake of the controversy, with a significant loss of revenue there as well. The state boards also provided other funding for conferences and events on NSBA’s behalf.

Meanwhile, Republicans on the Senate Judiciary Committee have demanded that Garland rescind his controversial school board memo after learning that the FBI created a “threat tag” to track risks to education personnel.

The 11 Republicans cited an internal email from a DOJ whistleblower showing that the FBI counterterrorism and criminal divisions designated in October the tag EDUOFFICIALS to “track instances of related threats” to school administrators, board members, teachers and staff.

The GOP lawmakers’ letter to Garland began: “Are concerned parents domestic terrorists or not?”

The senators had previously called on Garland to address free-speech concerns over his Oct. 4 memo bringing in the FBI to address “the rise in criminal conduct directed toward school personnel,” but said that the latest disclosures had raised the stakes.

“In light of a disturbing new revelation about the FBI’s Counterterrorism Division following your directive, we call on you to withdraw your October 4 memorandum and make abundantly clear through words and actions that no arm of the government, including the offices under your command, may be used to chill criticism of local government officials,” said the letter to Garland.

National School Board Association has lost 17 states, 40 percent of its budget added by Editor Two on December 10, 2021
View all posts by Editor Two →