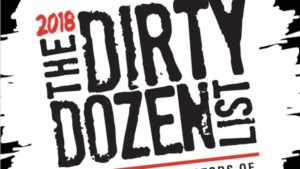 The National Center on Sexual Exploitation, which puts out the list, said Amazon “facilitates the sale of materials that sexualize children and normalize the dehumanization and sexual commodification of women. Such products include eroticized child nudity photography books, sex dolls (many with childlike features,) and books with ‘how to’ instructions for sex trafficking.”

According to Haley Halverson, vice president of the Center: “If the #MeToo movement has revealed anything, its that sexual exploitation runs deep in our society – and the Dirty Dozen List gives individuals a voice, and a chance to take action and hold mega-corporations and public influencers responsible for promoting rape myths, and sexual entitlement, that fuel sexual harassment and violence.”

“We are talking about mainstream corporations and services like Apple’s iBooks, Google’s YouTube, Roku and Twitter – which the American people use and interact with every day on a mass scale – and which simultaneously promote or profit from messages of incest, the dehumanization of women, sexual violence and even racism and child exploitation,” said Halverson.