In defiance of coronavirus lockdown orders, large groups of Muslims gathered in homes and mosques in the Middle East, Africa, and Asia over the weekend to celebrate Eid al-Fitr, marking the end of the Ramadan holiday season. 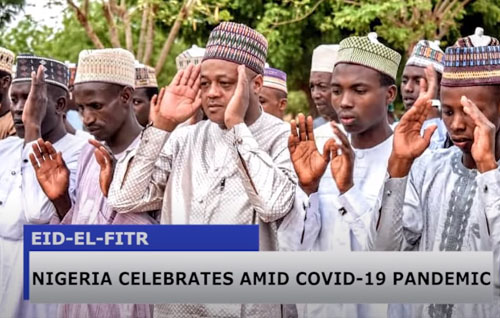 After a large number of Palestinians took to the streets to demand the right to hold Eid prayers and celebrations, the Palestinian Authority (PA) eased its coronavirus restrictions.

Local media reported that demonstrators marched to PA security headquarters in Hebron chanting “Allahu Akbar! We want to celebrate Eid al-Fitr!” PA officials responded by announcing that mosques in nearly a dozen towns would be allowed to open for Eid prayers.

In parts of the West Bank where the stay-at-home order remained in effect, Muslims ignored the restrictions to stage large prayer services on streets and in sports arenas, leading to some clashes with security officers and several reports of injury from gunfire, local reports said.

Many business owners also defied the lockdown to open their shops, since Eid is one of their most important shopping holidays.

“What we saw in the past 24 hours was a mini-intifada against the harsh restrictions imposed by the Palestinian government. The people feel that these measures are exaggerated. If people are allowed to go to shopping malls, why can’t they pray at their mosques?” one resident of Hebron told the Jerusalem Post.

Defiance of the lockdown was widespread in Kabul, Afghanistan, local reports said. Muslims filled the streets to buy traditional Eid treats and gifts. The Afghan government had urged citizens to respect the lockdown as coronavirus cases had spiked over the past two weeks, raising fears that Eid celebrations would cause a new outbreak.

“We are concerned that if the lockdown is not imposed properly, the number of cases will get out of control and beyond our capacity to treat or test them. We want a strict lockdown,” said Deputy Health Minister Waheed Majroh at a press conference on Saturday.

• In Iraq, a lockdown imposed by the government for the duration of the Eid holiday was ignored by a large number of celebrants. Health minister Hassan al-Tamimi attributed an increase in the number of COVID-19 cases to the lack of abidance by some citizens to the stay-at-home orders and ban on large gatherings.
• In Egypt, the staff of an isolation hospital in Alexandria defied a government ban and held a large Eid prayer service.
• In Indonesia, packed mosques were reported despite coronavirus lockdown orders which banned congregational prayers at mosques and open fields, family reunions, and relatives bearing gifts for children. The world’s largest Muslim-majority nation, with more than 240 million people, has reported nearly 22,000 infections and 1,350 fatalities, the most in Southeast Asia.

Muslims were also seen defying pandemic controls to celebrate Eid in Africa, with crowds gathering to pray at mosques in Cameroon and Nigeria, reports said.

Nigerian officials lifted most of the pandemic restrictions and attended large prayer services themselves, along with top religious officials. One Eid prayer service was held in an open field large enough to accommodate tens of thousands of people.

Hundreds crowded into numerous mosques across the country, with very little attention paid to social distancing protocols, although a few imams reported lower-than-normal attendance due to coronavirus concerns.

“We are here to pray, so I don’t think it is necessary to wear a nose mask or leave a space between myself and the next person,” one Nigerian mosque attendee explained.

Public officials were also said to be dismayed that one of the few restrictions they left in place, a ban on women and children attending Eid services, was widely ignored.

Thousands of Muslims in Cameroon’s capital, Yaounde, defied Sunday’s ban of Eid-al Fitr public prayers, Voice of America reported. The ban was announced after more than 500 people tested positive for COVID-19 in Cameroon within 24 hours.

Speaking via a messaging application from his residence, Mamadi Mahamat, the highest government official in Yaounde’s second district, said he was surprised that many Muslims were ignoring government instructions that Eid-al Fitr prayers not be held this year in public spaces, with thousands of faithful coming out to pray as has been traditional in Cameroon.

Issa Karimou said that although he is aware of the dangers of COVID-19, he prayed in public with other Muslims in Cameroon as a sign of respect to the teachings of the Quran.

Karimou said he would be disobeying the Prophet Muhammad and the teachings of the Quran if he failed to say Eid prayers in public together with other Muslims. He said that without the prayers, his 30 days of fasting from dawn to dusk during Ramadan would be in vain, and that the government should instead encourage Muslims to pray constantly for Allah’s grace and protection as people are being infected with COVID-19.