Video broadcast by NewsmaxTV on Thursday showed police removing barricades and waving protesters into the Capitol on Jan. 6. 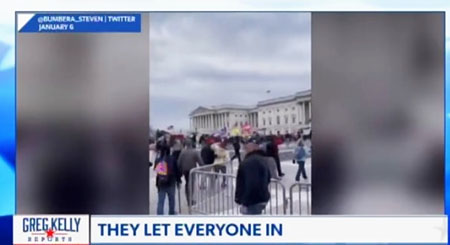 Capitol Police officers were “just standing by” and “welcoming” protesters into the Capitol, NewsmaxTV host Greg Kelly noted in broadcasting the video.

Kelly also cited people familiar with the Jan. 6 Commission as saying the commission does not plan to investigate the shooting death of Ashli Babbitt by a Capitol Police officer.

“January 6th was not an insurrection,” Kelly has said.

“Not an insurrection — no matter how much they hype this, exaggerate it, sensationalize it, lie about it — it was not an insurrection. They are, doing all of those things to achieve even more political power.”

“What they’re trying to do really is cancel Trump supporters, or at least tarnish us for possibly having — I don’t know, did we have something to do with this? Of course not,” Kelly said.

The video published on Sunday shows officers speaking with several protestors — including Jacob Chansley, the so-called “Q shaman” — inside the Capitol.

One officer, identified in the video and confirmed by charging documents as Officer Keith Robishaw, appears to tell Chansely’s group they won’t stop them from entering the building. “We’re not against . . . you need to show us . . . no attacking, no assault, remain calm,” Robishaw warns.

Chansley and another protestor instruct the crowd to act peacefully. “This has to be peaceful,” Chansley yelled. “We have the right to peacefully assemble.”

Chansley is not charged with assaulting an officer. He faces several counts for trespassing and disorderly conduct. He has been incarcerated since January, denied bail awaiting trial. He has no criminal record.