Who is Bill Gates, really?

Lurking behind a carefully crafted facade of nerdy goodness, Bill Gates was a creepy jerk who was hitting on women in the workplace, according to several new reports. 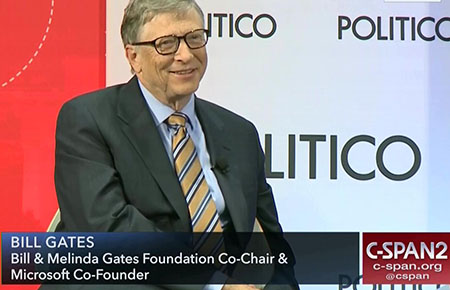 In 2019, Microsoft board members pursued an investigation into the billionaire’s prior affair with a Microsoft employee that was deemed inappropriate, the Wall Street Journal reported on May 16, citing people familiar with the matter.

Board members hired a law firm to conduct an investigation in late 2019 after a Microsoft engineer alleged in a letter that she had a sexual relationship over years with the married Gates, the report said.

Amid the investigation, “some board members decided it was no longer suitable for Gates to sit as a director at the software company he started and led for decades,” the people said, according to the Journal report.

Gates resigned from the Microsoft board on March 13, 2020, before the board’s investigation was completed and before the full board could make a formal decision on the matter.

Gates, 65, and his wife Melinda French Gates, 56, announced earlier this month that they were ending their marriage after 27 years.

“Reports from The New York Times and The Wall Street Journal indicate Gates, at times, treated the workplace like a pickup spot, making advances toward women who worked for him,” Business Insider wrote. “Several employees told The Times he engaged in ‘clumsy’ and ‘questionable’ workplace behavior. They also said he could be ‘dismissive’ of his wife and overly ‘dominant’ in Gates Foundation meetings, even though the organization was working on several women’s-empowerment initiatives.”

“Thing is: Gates never should have had such luster in the first place. He already showed his darker side decades ago when his company, Microsoft, was being sued for antitrust practices, and he tipped his arrogant, domineering and smug self for all the world to see. It was captured on video. It was after this public relations disaster that his business allies determined he needed a whitewashing, and voila, philanthropy proved the path,” Chumley wrote.

“Here’s a guy the world looked to as a sort of pandemic guru — the one, or only one of a select few, who could guide the good citizen-sheep into the safe mask-wearing, social distancing fold and save them, via COVID-19 vaccines combined with Gates-ly wisdom, from themselves,” Chumley continued.

Gates would become a key influencer of World Health Organization (WHO) covid policy.

“An unelected, unaccountable-to-the-people, biggest influencer of health and medical decisions for an entire globe of people — for an entire country of free Americans,” Chumley noted.

“Bill Gates, Vaccine Monster,” The New Republic wrote in April of this year about the billionaire philanthropists’ “bold bid to manage the world’s scientific response to the pandemic.”

Online, in television media, at speeches before bureaucratic and business organizations that serve the world — “Everywhere was Gates and his recommendations — in ‘air quotes’ — that soon enough filtered their way into governments as mandates,” Chumley wrote. Turns out, “he’s a jerk who far too many in the world — in America! — worshipped as a god-like leader toward pandemic safety.

Meanwhile, Gates was cultivating Epstein. “Gates hoped the well-connected pervert could help him secure the Nobel Peace Prize, one former Gates Foundation employee  told the Daily Beast in a May 18 report.

The foundation’s communications staff had been alerted to Gates’ relationship with Epstein, being told that it “was a maneuver to try to get himself a Nobel Peace Prize,” with the staffer saying that Gates allegedly kept some employees on call on the day the Nobel Peace Prize was awarded in the chance that he won.

“We were aware of things that were potential reputational risks for the foundation and the co-chairs, Bill and Melinda,” said the former staffer. “Even back then, people knew this guy wasn’t squeaky clean,” they said in reference to Epstein.

Gates’ relationship with Epstein was part of what prompted Melinda Gates to begin speaking with divorce lawyers, reports say. Bill Gates had also reportedly received marriage advice from Epstein during past visits to the pedophile’s Upper East Side Manhattan home.

The former employee added that “He [Gates] thought that Jeffrey would be able to help him, that he would know the right people, or some kind of way to massage things, so he could get the Nobel Peace Prize, which is what Bill wants more than anything else in the world. I think he was ultimately disappointed it didn’t work out.”

Gates and Epstein had reportedly traveled to the Strasbourg home of Thorbjorn Jagland in 2013, who at the time was the chairman of the committee that awards the Nobel Peace Price.

The Norwegian newspaper Dagens Næringsliv reported that on March 27, 2013, Jagland had entertained a small group of famous people, which Epstein and Gates had attended. Gates was mentioned at that time as being a possible candidate for the prestigious prize.

“They came to my Residence with their respective delegations,” wrote Jagland in an email of the visit, the paper reported.

Out of control by design: Big Tech deputizes Artificial Intelligence to secretly do its bidding
Read more