The Massive Ordnance Air Blast (MOAB) bomb dropped by the U.S. in Afghanistan on April 13 killed at least 36 terrorists, according to the Afghan military. 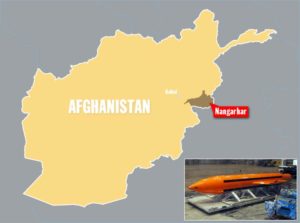 The 21,600 pound bomb was dropped by an MC-130 aircraft on a massive ISIS tunnel network in the Nangarhar province of Afghanistan used for smuggling weapons and fighters, Israel’s Arutz Sheva reported on April 14.

U.S. President Trump touted the bombing in a press briefing, saying it exemplified the differences between his administration and its predecessor.

The bombing came a week after a U.S. special operations soldier was killed by ISIS terrorists in the same district targeted in the April 13 bombing, Achin, near the Pakistani border.

The attack included the first ever use of the GBU-43/B MOAB, or “Mother Of All Bombs”, the largest conventional bomb ever used in combat by the United States.