UNITED NATIONS — In the bizarre ritual of the Democratic People’s Republic of Korea, a recent rocket launch was intended to put the icing on the dynastic cake of the centennial birthday celebrations of the late dictator Kim Il-Sung.

The world press had been invited to the reclusive neo-Stalinist state, and the stage was aptly set for the kind of mass rally, goose-stepping parades which defines the DPRK, as well as for the formal political enthronement of Kim Jong-Un. But the anticipated climax of the celebrations, the launch of a long-range missile, fizzled out and it dropped into the Yellow Sea.

After the rocket’s failure shortly after takeoff, all eyes averted from the political extravaganza in Pyongyang to the abject failure of a near billion dollar boondoggle which an impoverished socialist state can hardly afford. For a country living on UN humanitarian aid, this became an epic embarrassment. 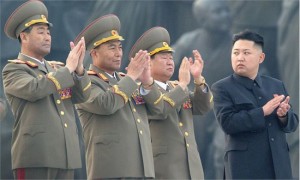 The real question becomes as it did with two previous missile failures in 2006 and 2009, does the regime go for an encore nuclear test? Or to save “lost face” both inside North Korea and abroad, does Jong-Un launch a military provocation with South Korea?

The spectacular scientific failure of the Unha-3 rocket which was purportedly launching a satellite, became an acute embarrassment to the hubris of the regime who was commemorating Kim Il-Sung’s birthday, as much as it was celebrating the leadership transition to his untested grandson Kim Jong-Un. In the Marxist Monarchy which rules North Korea, power had passed from the elder Kim “Great Leader” to his son Jong-Il, aka “Dear Leader,” who died in December and now officially to the 28-year-old Jong-Un.

Following the Friday 13th rocket fiasco, the UN Security Council came out rhetorically swinging and in a Presidential Statement (although not a formal resolution) strongly condemning the attempted launch by the Democratic Peoples Republic of Korea (DPRK) of a so-called satellite, stressing the action as well as any other use of ballistic missile technology is a “serious violation of United Nations resolutions.”

The statement by American Ambassador Susan Rice who is President of the Council for April added, “The Security Council deplores that such a launch has caused grave security concerns in the region.” East Asian regional security, especially South Korea’s and Japan’s, is profoundly threatened by the antics of a loose-cannon regime in Pyongyang.

Indeed on Feb. 29, the Obama administration was coaxed into offering 240,000 tons of humanitarian food aid to the socialist paradise in exchange for Pyongyang’s promises of good behavior on the missile front. Though that deal is now cancelled, as the Wall Street Journal editorialized, “The larger administration error is that it continues to bounce between the equally futile alternatives of engagement with the regime and condemnation at the UN.”

A source who recently visited Pyongyang, the OZ like capital of North Korea, produced amazing photos; of a city with some impressive architecture but with few cars, flickering lights, heroic propaganda posters, and people scavenging for roots and bits of bark. This could have been Mainland China during the “Cultural Revolution,” circa 1967, but it’s the DPRK a few weeks ago!

But inside the totalitarian time-warp that envelops the quaintly titled Democratic People’s Republic of Korea, the surreal becomes the real. Much of the dynastic Kim Cult rests on a mélange of mythology combining Marxist-Leninism, hyper-nationalism, Confucianism, and traditional rural shamanism. This political witches brew has long served the communist elite.

I’m intrigued by a haunting photo of Kim Jong-Un standing next to three dutifully clapping army officers; the taciturn faces of the military men look determined , dour, yet somehow not respectful. The new Supreme Leader Kim Jong-Un is clapping but looking askance at his military praetorians who evoke the tale “Speak no Evil, Hear, No Evil, See No Evil.”

In a speech to his assembled minions, Kim Jong-Un stressed that his “first, second and third priorities” were to strengthen the military, thus continuing his father’s Military First policies.

But has the million man People’s Army really accepted the untested and untrained rule of Kim Jong-Un, a four star general who never as much spent a day in the boy scouts? Time will soon tell.

Missile fizzle: Fitting symbol of a bizarre failure in top-down government added by Editor One on April 18, 2012
View all posts by Editor One →