Their numbers having swollen by the surge in immigration, millennials are now the largest generational group in the U.S. 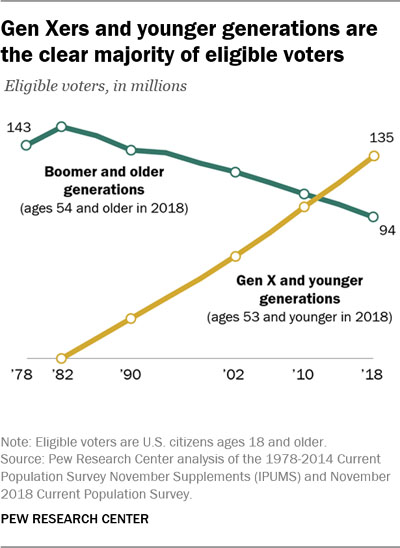 The rise in the ranks of millennials has also contributed greatly to Americans under 53 surpassing baby boomers as the largest voting bloc, according to a Pew Research Center report.

“By 2019, millennials are projected to number 73 million, overtaking Baby Boomers as the largest living adult generation. Although a greater number of births underlie the Baby Boom generation, Millennials will outnumber Boomers in part because immigration has been boosting their numbers,” the Pew Research Center said.

“As of November 2018, nearly six-in-ten adults eligible to vote (59 percent) were from one of these three generations, with Boomers and older generations making up the other 41 percent,” said Pew.

The 2018 midterms was the first U.S. election where more millennials were eligible to vote than baby boomers.

An estimated 31 percent of people ages 18 to 29 voted in the 2018 midterm elections, according to the Center for Information and Research on Civic Learning and Engagement (CIRCLE).

According to exit polls reported by NPR, two-thirds of people ages 18 to 29 voted Democrat in the 2018 midterms, a major increase from previous midterms. In 2014, the youth vote was more evenly split, with 54 percent of millennials voting Democrat.

In the 2016 presidential election, 51 percent of eligible millennial voters cast a ballot, with 55 percent of those choosing Hillary Clinton and 37 percent President Donald Trump. In 2012, young adults voted for President Barack Obama over Mitt Romney by 60 percent to 37 percent.

According to the Pew report millennials, age 22-37, will also keep their population steady, reaching 74 million in 2050, again likely aided by immigration.