Mike Lindell produced banned election documentary in less than a week, but he’s just getting started

My Pillow CEO Mike Lindell said he spent five, 21-hour work days putting together his 2020 election documentary “Absolute Proof”. The documentary aired three times daily on One America News over the weekend and he claims it has been viewed millions of times at his website.

The documentary, which has been viewed more than 1 million times on Rumble, was pulled by YouTube and Vimeo, and Facebook applied labels to posts Lindell made about his movie warning users about its contents. 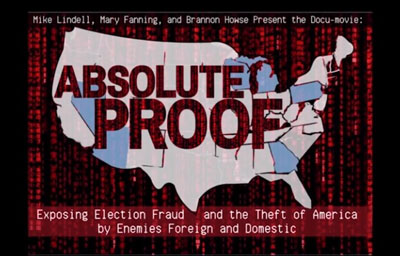 Lindell said the documentary would prove “100 percent” that the election was stolen from President Donald Trump.

“We prayed over every word that was in this piece,” Lindell told the Christian TV network Revival Channel.

“The last four days, 12 people, three hours of sleep a night, a lot of stuff was done in one take because the Holy Spirit was just speaking it out.”

Lindell interviewed numerous analysts and officials on evidence of fraud in battleground states and concludes the film with data presented by Mary Fanning.

“Cybersecurity experts began documenting intrusions in 2195 U.S. counties beginning on Nov. 1, 2020 in real time and recorded each hacker’s location and IP address as well as the target counties as well as the impact on the votes cast the U.S. president over the next several days. 66 percent of the intrusions came from China, according to the data. Proof positive,” Fanning said.

Discussing his film on Steve Bannon’s “War Room” podcast, Lindell said he had an “epiphany” when speaking about Dominion Voting Systems and Smartmatic, two companies he continues to say implemented machines that were manipulated in Joe Biden’s favor during the November election.

Lindell’s epiphany was a threat to sue Dominion if they did not agree to meet with him and the media in a public forum to answer his election fraud accusations presented the documentary.

“I will go after them, if there is a way to do it, I will do that for the American people,” Lindell told Bannon. “The truth needs to come out. So if the truth does not come out here and they keep suppressing it, what other recourse do I have? Then I have to bring them to court, and Smartmatic, bring them all to court.”

Lindell suggested the discovery process in a court battle could bring forth hard evidence related to the election against Dominion.

“Pretty soon, everyone’s going to see this, including nine Supreme Court Justices,” Lindell says at the end of his film. “You’re all there watching, all nine of you… I don’t know what you can do, but I know you’re there to protect our country.”

Interviewed on the “What’s On Your Mind” radio show, Lindell said he has been “hiding out” under “heavy security,” adding that he made the movie under the protection of former Navy SEALs.

“We’ve put this together, and it’s, I want to say, 100 times better than I could have imagined,” Lindell said about the film.