Democrats and their megadonors are looking to use the coronavirus crisis to push for major, permanent changes in the U.S. system of voting, including vote by mail, curbside voting and ballot harvesting, reports say.

The George Soros-funded Brennan Center for Justice has called for the use of drop boxes to deposit ballots on voting day this November. 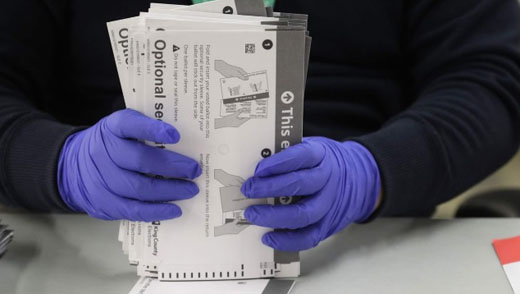 Citing fears that coronavirus makes it too dangerous to vote in person, the Brennan Center and other Soros-financed groups launched a campaign advocating for a “vote by mail” system in the 2020 presidential election.

Ballot harvesting is the collecting and submitting of absentee or mail-in voter ballots by volunteers or elections workers. Curbside voting allows voters to vote from their vehicle at a polling station.

Such proposals would mostly benefit the Democratic Party, analysts say. Republicans fear the prospect of voter fraud, since mail-in voting would be harder to authenticate.

Breitbart News noted that Elias, the 2016 Clinton campaign attorney and “election expert” who, through his law firm Perkins Coie, “retained Fusion GPS to conduct the firm’s anti-Trump work on behalf of both Clinton’s 2016 presidential campaign and the DNC,” has, in many ways, spearheaded the progressive push for changes to U.S. voting methods.”

Attempting to use the coronavirus pandemic as a catalyst, Elias over the weekend outlined a list of changes he believes the U.S. needs to make to “fix” voting rules ahead of November’s elections:

“The uncertainties caused by COVID-19 have led a number of states to examine and adjust the rules for the November elections. Thus far, most of the planning has focused on how states will handle the predicted demand for voting by mail,” Elias wrote for The Atlantic.

“There is no question that voting by mail is an important part of the solution. It mitigates the problems of long lines and fosters social distancing. But the specific rules used to implement vote by mail may determine whose vote is counted and whose is not,” he continued, listing four mail-in voting “safeguards,” including free or prepaid postage and the ability of “community organizations” to “help collect and deliver voted, sealed ballots.”

The Brennan Center is calling for jurisdictions to “offer secure drop boxes in accessible locations for voters to drop off ballots directly.”

The Brennan Center’s plan calls for a “universal vote-by-mail option for all voters.” The budget estimates $54 million to $89 million for increased ballot printing and $413 million to $593 million for extra postage costs.

To alert the public about changes to the voting method, the Brennan Center wants a $252.1 million public education campaign which “must include advertising in non-English languages.”

Brennan also wants $85.9 million to bolster online voter registration and it advocates implementing same-day registration. The Brennan blueprint allows for mail-in ballots to be processed prior to the close of polls on Election Day.

Democrat Sens. Amy Klobuchar of Minnesota and Chris Coons of Delaware cited the Brennan Center’s coronavirus voting plan in a letter to House and Senate leaders, urging extra funding for the scheme.

Klobuchar and Coons are among over a dozen Democrat senators who introduced a bill last month to allow for the widespread mail-in ballots, along with other updated voting measures for the upcoming presidential election. Democrat Reps. Suzan DelBene of Washington, Earl Blumenauer or Oregon, and Jamie Raskin of Maryland introduced a companion bill in the House.

The Brennan Center for Justice, located at NYU School of Law, is heavily financed by Soros’s Open Society Foundations and is the recipient of numerous Open Society grants.

Alongside the Brennan Center are a slew of progressive groups tied to Soros money that are working overtime to push mail-in voting.

The Soros-funded Brennan Center’s mail-in ballot plan was weaponized by the Stand Up America activist group, which launched a nationwide program urging Americans to nudge Congress to fund the voting changes. The group’s activities reportedly resulted in more than 19,000 calls to congressional offices in one day alone.

Meanwhile, a coalition of progressive groups are reportedly mounting a multimillion-dollar campaign to not only change the presidential election system to mail-in voting during coronavirus, but to keep the mail-in balloting as part of the permanent way Americans will vote in the future.

The other groups in the mail-in advocacy coalition include the National Association of Non-Partisan Reformers, Public Citizen, Common Cause, National Vote at Home Institute and the Center for Secure and Modern Elections.

Common Cause is funded by Soros’s Open Society Foundations. So is Public Citizen.

The Center for Secure and Modern Elections is a project of the left-leaning New Venture Fund, which doesn’t disclose its donors.

The National Association of Non-Partisan Reformers lists its founding organization members as including FairVote. FairVote is a project of the Soros-funded Center for Voting and Democracy.

Elias said in-person voting should still be available, albeit with a series of additions.

“Some voters—and in particular many minority voters-strongly prefer voting in person, either because of historical mistrust in the vote-by-mail system or because of the expressive nature of showing up at the polls,” he said.

Elias said states should “guarantee” adequate staffing at polling locations by offering course credit and pay to high school and college students, as well as provide government employees with overtime pay for working Election Day. He also believes curbside voting — where the voter remains in his or her vehicle throughout the entire voting process — should be extended to voters of all ages.

Voters who show up at the wrong polling location should be allowed to vote a ballot for those offices for which they are eligible. Some states currently allow this, but others force these voters to cast a provisional ballot that, more often than not, doesn’t count.

Finally, states should develop systems that allow voters to sign up to reserve a time to vote during off-peak hours. Such a system would reduce lines by incentivizing voters to show up during non-peak times.

“The goal should be to avoid letting the rules dictate who wins based on whose voters can participate,” he said. “Only by taking these steps can we be assured that the rules of the election won’t unfairly tilt the playing field.”