As Russia’s Vladimir Putin was preparing to invade Ukraine, his American counterpart’s immediate family was coming under legal scrutiny one year after Joe Biden was installed.

A scorned ex-girlfriend and the ex-stripper who he had an out-of-wedlock child with both testified before the grand jury which is reportedly investigating Hunter Biden’s business dealings with communist China. Meanwhile, alternative media were reminding Americans that the Biden family had become rich through questionable business deals which looked a lot like influence peddling, not only in China but Ukraine.

Zoe Kestan, 28, an ex-girlfriend who reportedly became furious after being dumped by Biden after urging him to get off drugs, testified before the panel on Tuesday, the New York Post reported.

Lunden Roberts, 30, the former stripper who has a 3-year-old daughter with Biden, has also testified before the grand jury in Wilmington, Delaware, the Daily Mail reported.

Kestan, a lingerie and textile designer who uses the online handle “weed slut 420”, testified “about shacking up with Biden at high-priced hotspots including the Four Seasons, Mercer, SIXTY SoHo and Soho Grand hotels in Manhattan and at the Hollywood Roosevelt, NoMad and Jeremy West Hollywood in Los Angeles,” a source told the Post.

Kestan also testified that Hunter Biden had directed her to withdraw “thousands of dollars at a time” from ATMs and gave her cash to purchase clothing, meals and other items, but said she had no idea how he obtained the money, the Post quoted the source as saying.

Trump White House adviser Garrett Ziegler, who heads the Marco Polo research group, noted in a Telegram post: “If you’re wondering … yes, I am aware of Zoe testifying. She is a key part of our SEX CRIMES section of the Report. We will, of course, be sending physical copies to the U.S. Attorney in Delaware et al. (including the chart below). 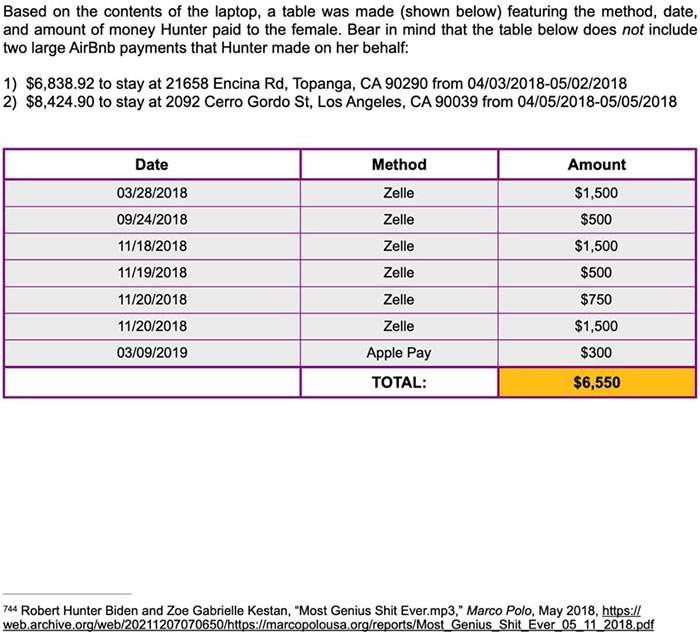 Ziegler included a transcript of an audio recording Kestan made of her and Hunter Biden which she entitled “Most Genius Shit Ever”. 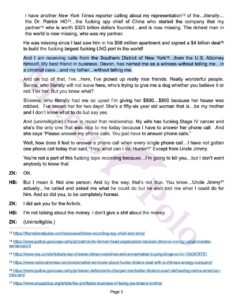 Meanwhile, the Daily Mail reported that Roberts gave evidence at the federal courthouse Wilmington for several hours on Tuesday morning. Details of grand jury testimony remain secret and the single mother declined to speak about the case with a DailyMail.com reporter as she left.

DailyMail.com revealed last year that Hunter Biden not only had an affair with Roberts but once hired her to work at Rosemont Seneca, his Washington, D.C.-based investment firm that now a focus of the federal inquiry.

Rosemont Seneca was one of a handful of companies listed in a May 2019 grand jury subpoena that ordered JP Morgan Chase to provide records of transactions between Hunter’s various ventures and the Bank of China for the previous five years.

Archer’s attorney, Matthew Schwartz, confirmed that his client had “cooperated completely” with the DOJ after the subpoena was leaked online last month by Marco Polo which is preparing a comprehensive report on the Biden family.

“The document offered the first real clues as to the specifics of Delaware U.S. Attorney David Weiss’s probe, which was launched in late 2018 but controversially kept under wraps until weeks after the 2020 Presidential election, supposedly to avoid becoming a campaign issue,” the Daily Mail noted.

CNN has reported that the investigation is focused on Hunter’s business dealings in China while Politico claims it relates to whether he paid taxes on all of his income.