Hold the pickles. Hold the lettuce. Hold the $15 per hour worker? 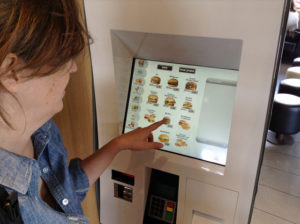 Meet the Big Mac ATM machine. McDonald’s and other quick service restaurants are answering the push led by Democratic Sen. Bernie Sanders for a nationwide $15 minimum wage by installing automated kiosks instead of adding more humans to the workforce.

Soon the McDonald’s workers Sanders and Democrats promised would get a “fair living wage” to take customers’ orders for Big Macs “will have absolutely no wages at all courtesy of the ‘Fight for $15,’ ” Zero Hedge reported on Jan. 26.

“The Big Mac ATM is just the tip of the iceberg when it comes to low-skilled jobs that will be automated as a result of the $15 minimum wage that has already been passed in several states across the country.”

Fast-food chain Wendy’s announced plans to start installing self-serve kiosks later this year at some of its over 6,000 locations. The chain is replacing cashiers and other low-skilled jobs with computers and automated machines because, as Wendy’s president Todd Penegor told Investor’s Business Daily, it has to compensate for wage hikes.

McDonald’s Europe president Steve Easterbrook announced in 2011 that the fast-food restaurant was planning on “hiring” 7,000 touch-screen cashiers to be installed across the continent, according to CNET and the Financial Times. Easterbrook said it would make transactions more efficient — namely lowering the average interaction three to four seconds each.

“You don’t need to communicate with staff and it would be much quicker,” said Weiky Filho, a student enjoying a burger at McDonald’s in London, according to the Financial Times.