McCarthy’s take on indictment of Roger Stone: ‘There is no espionage conspiracy’

It is evident from the indictment of Roger Stone that special counsel Robert Mueller likely knew from the start of his Russia investigation that there was no “collusion” and that President Donald Trump was not a Russian agent, former Assistant U.S. Attorney Andrew McCarthy said.

“I read that indictment and what it says to me is that the special counsel and the FBI have known for at least a year – probably much longer than that – that there is no espionage conspiracy and there was none between the Kremlin and the Trump campaign,” McCarthy told Fox News. 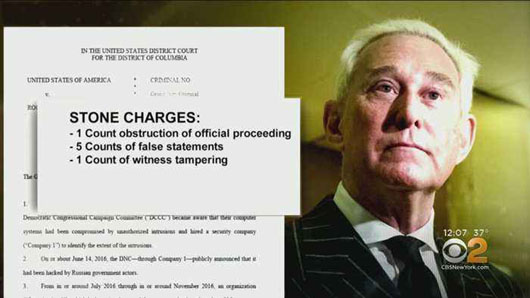 “And because of their obsession for investigative secrecy, the thing that the country should have known, the country hasn’t been allowed to know. It’s been a situation where we’ve operated under the possibility that the person we elected as president was suspected of being a Russian agent. They’ve known that wasn’t true for a very long time. And they had an obligation to correct the record.”

“I’m assuming everybody knows by now that Stone was arrested in a pre-dawn raid, much like the pre-dawn raid that captured Elian Gonzalez and sent him back home to the communist paradise of Cuba,” Limbaugh said. “Roger Stone was asleep (no doubt this is an Andrew Weissmann move) and armed agents stormed into his home down near Fort Lauderdale at 6 a.m. to roust him from bed and arrest him under an indictment for lying to investigators. Roger Stone had not committed a crime until the Mueller investigation began. Roger Stone had not committed a crime until they began questioning him.”

Limbaugh continued: “Some of you might say, ‘Well, no, no, no, Rush. Look at the indictment!’ If the Mueller investigation were not up and running, and if the Mueller investigators had not talked to Roger Stone, there’s no crime that Stone’s committed here. There’s no crime alleged that he committed. These crimes are process crimes – and the media knows it, the Left knows it, and they’re trying to say, ‘Doesn’t matter! These are crimes, and every one of them is a new associate of Trump that is linked to Trump, and Trump is going down.’ That’s what they’re sticking with, and that’s what they’re running with, even though the investigators have known there is no Russian collusion.”

Stone was indicted “for all of these ancillary things that have nothing to do with the entire reason the special counsel exists,” Limbaugh said. “He had not committed a single crime until the crimes of lying to the FBI, giving confusing answers. Same question being asked 50 times. Different ways. So if you ask the question 50 different ways and you get 10 different answers, you charge the guy with lying.”

Now, Limbaugh said, “the media is en masse collected here in deep anticipation waiting for Trump to be indicted by Stone. That’s what they think is gonna happen. Stone’s gonna save his skin. Stone’s gonna say, ‘Trump made me do everything! Trump made me do it all! I want out! I want out!’ That’s what they’re hoping and praying is gonna happen. I’ll tell you one other thing to stop and think about here to again illustrate the political nature of this entire investigation. You know what Mueller is doing? You go after Flynn, you go after Manafort, you go after Stone. Who in their right mind is gonna sign up for the Trump re-election campaign in 2020? I mean, if you can go to jail – if you can be threatened and ruined for working for Donald Trump – who is going to do it? That’s another thing Mueller is doing here, I am convinced.”

Limbaugh lamented “The co-opting of the entire Department of Justice for the express purpose of overturning election results that they don’t like, the manufacturing of a false premise, the creation of the illusion of serious conspiratorial crimes that involve treason – and none of it happened! None of it! And they know it didn’t happen! From the moment they convened their investigation, they know it didn’t happen! So there is knowledge from the beginning of this that they are executing a gigantic fraud on the American people.

“And their attitude about it is, ‘Well, we know more than the American people, and we know what a danger Donald Trump is. We know how incompetent he is. We know how he has no business being president. We know that this shouldn’t have happened, and it shouldn’t have been allowed to happen, not with us running things like we do. So we’ve gotta get rid of this guy. He just has no business being president. The American people elected him, but screw them!’ ”