McCarthy wins GOP vote for Speaker of the House 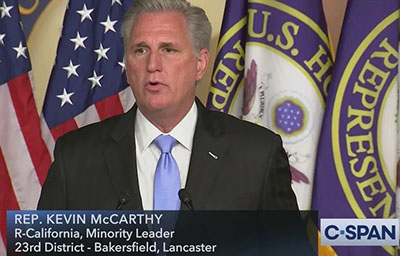 McCarthy easily beat back a challenge by Rep. Andy Biggs of Arizona.

Analysts noted that McCarthy’s support came from a large cross-section of the House GOP conference, including conservatives such as Rep. Jim Jordan of Ohio and Rep. Marjorie Taylor Greene of Georgia and centrists like Rep. Brian FitzPatrick of Pennsylvania.

Questions remain over McCarthy’s ability to lock up the speaker position in a full vote on the House floor in January, especially considering the number of Republicans who opposed him on Tuesday.

“Losing 31 means he is in serious danger of not having the votes in January which would mean he’d need to drop out either that day or he could decide to before,” Fox News cited a senior aide to GOP leadership as saying. “At that point, others would pounce.”

Republicans are expected to have a majority between 218 and 228 seats. The GOP will fall far short of picking up the 60 seats McCarthy had predicted in the midterms.

Also on Tuesday, incumbent GOP Whip Steve Scalise of Louisiana was elected unopposed by voice vote to the post of House majority leader during the next Congress.

“Politics is a blood sport. We have to do anything we can to stop our enemy. And the enemy is the Democrat Party.” pic.twitter.com/M747XLCT0O

McCarthy wins GOP vote for Speaker of the House, WorldTribune.com