Maricopa County officials admitted on Thursday that they deleted election data that they had previously failed to turn over under a subpoena ordered by the Arizona Senate as part of its audit of the county’s 2020 election.

Under questioning from Arizona Republican Rep. Andy Biggs during a House hearing on election integrity, Bill Gates, the Maricopa County Board Vice Chair, admitted that Maricopa officials had deleted the files. Gates said the officials first archived the files and then deleted them. 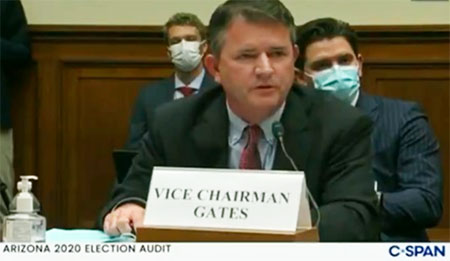 When Biggs asked why the archived records were not turned over to the audit under the subpoena ordered by the Arizona Senate, Gates told the hearing on Thursday it was because the subpoena didn’t specifically ask for archived files.

“Is it standard practice to delete files off a server after an election, Mr. Bennett?” Biggs asked.

Ken Bennett, who served as president of the Arizona Senate and as the 19th Secretary of State of Arizona, responded, “I hope not.”

“Mr. Gates, would you agree with that?” Biggs asked.

“I would say that it’s appropriate to maintain files, and that’s exactly what we did,” Gates responded. “The deleted files have been discussed, and they were archived.”

Biggs noted: “So you admit that you guys, Maricopa County, did delete files off the server after the election?”

“That were archived,” Gates said.

Biggs asked: “Yeah, and so when you released the servers and this information to the auditors, to begin with, they didn’t have access to the deleted files, is that correct?”

Biggs fired back: “So you didn’t feel obligated to turn that over, then, is that correct?”

Gates replied: “We responded to the subpoena.”

Bennett then responds: “I find it frankly laughable to suggest that a county, in response to a subpoena could say ‘we will delete files from the hard drives and materials that we give to the auditors because we have those files archived on data that we did not give to the auditors when the subpoena said to turn over all the records related to the election.’ ”

Maricopa County Board of Supervisors Chairman Jack Sellers said: “I just know that because there is limited space on these servers when you have to run another election then you have to make room for the additional election data.”

Investigator Ben Cotton has noted that files were deleted by those involved in the election the day before the machines were to be handed over to the audit team. Cotton noted that his team was able to identify the time stamps for when the files were deleted and altered by Maricopa County officials.

“We have captured screenshots of Maricopa County people at the keyboards during those time periods,” Cotton said.

This is a total cover up, and they admit it! pic.twitter.com/W6jD2X8NwP