Every now and then, the enemies of the American people tell the unalloyed truth.

Globalist D.C. think tank The Brookings Institution has come clean on what most logical observers already knew: the unprecedented wave of Third World foreigners pouring over our broken southern border is a welcome event for a ruling establishment that is eager to further the drive towards a cheap-labor economy in the U.S. 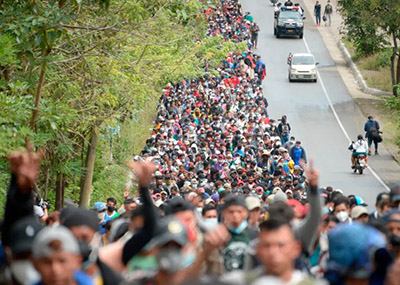 “President Biden, tear down those walls and let immigrants take jobs in high demand,” reads the headline to a remarkably blunt Feb. 24 article at the Brookings website authored by one Dany Bahar, a “Nonresident Senior Fellow – Global Economy and Development” for the organization.

Bahar’s malice towards the working people of this nation and the well-being and general harmony of local American communities could not be more unconcealed. “There is an unprecedented shortage of labor in the United States,” he asserts, again showing how these corporate lackeys always paint any labor market that might be beneficial to employee bargaining power as a dire threat.

But Bahar sees salvation at hand, and it is coming from massive human caravans from Guatemala and beyond:

At the same time, 2021 resulted in the highest recorded numbers of migrants entering or attempting to enter through the southern border to the United States. There is no reason to think this won’t continue in 2022.

These migrants, mostly from the Northern Triangle countries (Guatemala, Honduras, and El Salvador), are desperate to join the U.S. labor force, as they flee poor economic conditions — particularly after the economic slowdown caused by the global COVID-19 pandemic — as well as violence and instability in general….

The irony is clear; if there was any time in the modern history of the United States to promote a flexibilization of its migration policies, it is now. It is the most efficient and easiest way to offer a smart solution to the unprecedented tightness in U.S. labor markets. It is a no-brainer for several reasons.

Bahar casually dismisses any regard for American laborers with a wave of his hand. A Harvard study says immigrants actually help American workers. There you have it. Ruling establishment university research has spoken. The science is settled:

[T]hese workers will not “substitute” American workers, evidenced clearly by the worker shortages. In addition to this, decades of research by economists shows us that immigrants do not worsen labor outcomes of natives. In fact, immigrants are likely complements to American workers, which would come in handy, especially now.

It’s a lie that doesn’t work anymore, but that is not going to stop massive-immigration advocates from continuing to spout it.

Bahar isn’t even an American. His Brookings bio states he is an “Israeli and Venezuelan economist.” Why is a prominent D.C. think tank offering him a platform to promote the destruction of this nation? The answer is simple: The Brookings Institution has no loyalty to the United States. Its allegiance is pledged solely to a transnational order.

Sadly, Bahar’s wonk blogging is not being done in a vacuum. The effort to streamline a cheap-labor immigrant workforce is happening on the ground every day all across America.

In Maryland, a Democrat state senator has crafted a bill that would give illegal aliens the right to apply for professional licenses. As she notes, it is a right that already exists in over a dozen states.

Maryland employers, like every other state, are desperate to find workers. And a bill in the Maryland General Assembly might well be a solution to this pressing problem.

“Even in our classrooms, class sizes are getting bigger because we don’t have enough teachers,” said Sen. Cheryl Kagan. “Teacher assistants – we’ve got to have a solution and get people.”

Kagan knows full well what she is doing here. When she speaks of “careers,” she is talking about creating a situation of permanence for those who are illegally squatting in this country:

“There are so many careers that you need licensing for,” said Sen. Kagan, “and so if we waive these citizenship requirements, as 14 other states have done, we can make a big dent in our labor shortfall.”

WDVM notes that the medical establishment is fully on board, constantly seeking to expand its size while limiting its expenses:

“People understand that we need a solution, and we’ve got talented residents right here who are eager to step up,” said Sen. Kagan.

It again needs to be emphasized. All attempts to advocate for illegal aliens are meant to build an enduring edifice. It has never been about “solving the problem”:

How ironic, Sen. Kagan said, [that] these undocumented workers can enroll in Maryland colleges paying in-state tuition [and] can even enroll in community college for free. But — there’s a “but.”

“It seems really unfair to get them educated, get them prepared and then not allow them to get licensed to get a job,” said Sen. Kagan.

Delegate Joseline A. Peña-Melnyk, co-sponsor of the bill, made it clear to Washington Post columnist Theresa Vargas that she does not differentiate at all between American citizens and illegal aliens in her role as a state legislator:

When I spoke with Peña-Melnyk about the legislation, she ticked off the jobs that require licenses. The list stretched long. Among those mentioned: accountants, architects, counselors, dental hygienists, court reporters, locksmiths, morticians, midwives, plumbers and therapists.

Remember when the schtick was about “jobs Americans won’t do?” Gee, that category expanded rather abruptly, didn’t it?

“It’s simply the right thing to do, especially given the work shortage that we have,” she said of the legislation. “It shouldn’t matter what your legal status is. What matters is that you’re able to do the job and that you’re qualified. And we definitely need all hands on deck.”

The invasion of the United States has reached an all-time high in numbers. The Center for Immigration Studies reported Feb. 23 that:

An analysis of the Census Bureau’s monthly Current Population Survey (CPS) from January 2022 shows that the total immigrant population (legal and illegal) in the U.S., hit 46.6 million — the highest number ever in American history. Immigrants are also referred to by the government as the “foreign-born.” The growth and size of the immigrant population in the CPS are important because, unlike arrival figures for legal immigrants or border apprehensions, the CPS measures the total number of foreign-born people living in the country, which is what ultimately determines immigration’s impact on American society.

A CIS study of the data leads to the conclusion that the vast swarm of illegals is to a large part responsible for the staggering count:

The federal government, as well as outside researchers, have previously estimated that nearly three-quarters of illegal immigrants are Hispanic, so the recent increase in Hispanic immigrants can be seen as an indication that illegal immigration has increased dramatically in the last year. Hispanic immigrants accounted for 70 percent (1.1 million) of the increase in the total foreign-born population January 2021 to January 2022.

An estimated 61% of Americans live paycheck to paycheck. Yet the number of immigrants, both legal and illegal, in this country is higher than it has ever been. Instead of proposing ways to alleviate the pains of common citizens struggling to get by, our local and D.C. political establishment is busy furiously cooking up ways to get as many foreigners as they can into the domestic workforce.

And the great betrayal of the American people goes on.