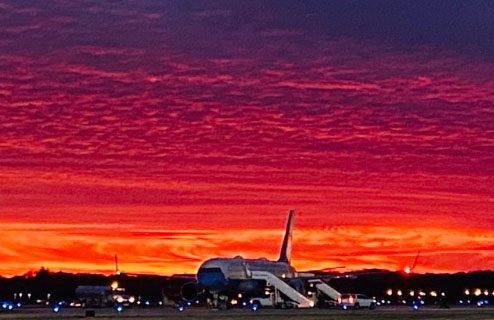 Tens of thousands of Trump supporters gathered at late-night rallies in Kenosha, Wisconsin, and Grand Rapids, Michigan on Monday night — the eve of Election Day. . . .

Grand Rapids was the site of the last Trump campaign rally in 2016, another late night event that began in the wee hours of the morning on Election Day.

Trump also spoke earlier in the day in Traverse City, Michigan. All three of the final rallies seemed to witness the same meteorological phenomenon of a red sky at sunset — usually a sign of high pressure moving in from the west, bringing good weather (hence the saying: “Red sky at night, sailors’ delight; red sky at morning, sailors take warning.”)