The following is excerpted from Rush Limbaugh’s June 29 radio broadcast:

You know, there’s a point that I have been making — we’ve got some evidence just to show you — and some people have been irritated at this. I have talked about the number of conservative friends I’ve lost when their daughters, primarily, became old enough to go away to college, did so, and came back — and I don’t recognize their dads anymore. They’re friends.

If you want to try to find one thing — and there’s more than one thing, obviously. But if you wanted to find, say, the central point from which everything else explodes, it is the fact that we lost public education to the Left, to leftist activists disguised as teachers.

I have no doubt about this, and it’s two generations worth now. One of the things that’s different, as I say, is that when my brother went away to school, there was no way… Even if he’d been indoctrinated as a liberal, there was no way he was gonna convince my dad of it when he came home from school to talk, but that’s happening, and particularly where the students are daughters. 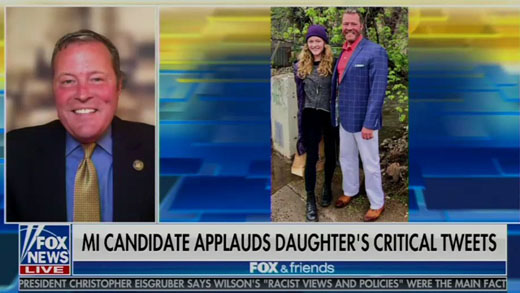 This is Robert Regan. This is Fox & Friends Sunday. Jedediah Bila was talking to this guy, Robert Regan, who is a Republican Michigan state house candidate. She said, “Your daughter tweeted out opposition to you running for the Michigan statehouse. Well, your house must be really interesting at holiday time, these holiday dinners, political discussions start.” So this guy’s daughter is campaigning against him, and here is his reaction…

Regan: I was deeply hurt. That stung. When I first saw that, I was like, Oh, my Goodness. Are you serious? It has to do with the indoctrination from the liberal and leftist, socialist, Marxist universities. You have to understand what these college campuses are like today — and these young women and young men, they want to fit into the group. So the whole idea that this is a bastion of free speech and ideas? That just doesn’t fly anymore.

Regan: I really do applaud her. She’s one special young lady, and I’m sure none of us expected this to go as viral as it has. And especially as a father and a family, you don’t want this stuff going out to public. You know, families are supposed to be safe spaces —

Regan: — and you have these discussions privately. I think it just kind of caught all of us off guard. But, yeah, she’s one special — special young lady, and, uh, I’m just really happy for her.

Rush: All right. Stop it. So the point is, now she goes away to school, gets indoctrinated, realizes she’s been taught that her father is a scourge, and she starts actively campaigning against him. And what does he do? (sigh) And I’m not trying to get the guy in trouble, believe me. But he talks about how proud he is, special young lady, really happy for her. Don’t doubt me that this stuff is happening out there, folks.

We’ve lost our country to multiculturalism, and that has happened in the schools.

I mean, multiculturalism exists for one reason, and that’s to destroy the dominant American culture, of which there is one and of which there has been since our founding. And it is among the greatest cultures in the history of the world, as evidenced by the American standard of living, Americans’ morality. I mean, just… But even if it’s no better than anybody else’s, it’s still ours.

I don’t think this is happening too much with sons, but with daughters I think this is going to town. The daughters go away to school, they come home to conservative families, and they’ve been radicalized. And it’s usually around the issue of race. The multicultural curricula has done its job of enforcing guilt on particularly affluent, white, female college students.

They’ve made them feel guilty as hell, and they’ve done it by evoking sympathy.

So the young co-ed comes home — and, look, I know a bunch of fathers, friends of mine, rock-ribbed conservatives who’ve given it up rather than lose their daughters. It’s that simple. Now, in some cases, these guys are themselves being converted, but more than that it is they don’t want to lose their daughters.

So their daughters come home and tell ’em, “Dad, you and Mom screwed up the planet. You screwed up the country. You’re racists, systemic racists. You don’t even understand it, but I’m gonna tell you how — and you are ruining America. You’ve….” Dad says (sputtering), “I just tried to give you the best life I could. I — I — I — What are you talking about?”

At the end of it, he doesn’t want to lose his daughter. He said, “Okay. Maybe you got a point.” So that brings us back to Robert Regan in Michigan. This is the state Republican official who’s described himself as to the right of me — and as if to prove what I’ve been saying about how young, white women have been indoctrinated at college, they come home and explain to their parents how their parents have been wrong all their lives.

He blames college for her anti-endorsement of him. He said, “When they go off to college, quite frankly, they get involved with these Marxist, socialist universities, start getting indoctrinated with things that are completely polar opposite from how you raised them.” His daughter’s name is Stephanie. She sent out a tweet last Tuesday that read, “if you’re in michigan and 18+ pls for the love of god do not vote for my dad for state rep. tell everyone.”

The tweet went viral with more than 177,000 likes by Thursday night, two days later. The candidate said, Mr. Regan said, “he was hurt by the tweet but he was proud of his daughter. ‘I’m the father. I’m human. You feel things like that. One of the things I did with my kids, all four of them, I always said focus on the truth. I’m really excited that they thought they had a solid enough relationship with me where they could diss me on social media and know that I’m not gonna disown them.’ ”

And here it is. Regan told TheHill.com he and his daughter mainly disagree with the issue of systemic racism. “‘She’s a big believer in that,’ he continued, while adding, ‘The only place where I really see systemic racism would be the abortion clinic, ’cause they seem to target the African American community.’ … while adding he thinks President Trump has ‘done more for the black community than any president we’ve had in the last 20 years.’ ”

You just (sigh) swallow it and go away and hope that you can save your own kid some other way. But you don’t dare go to the school and raise hell ’cause of what might happen to your kid. Same thing here — and this, folks, is how it happens. This is why I say that teachers in public school who have control over the multicultural curriculum are the biggest secret enemy or weapon that we face, because they’ve got automatic mind control over your kids.

And they have the ability — and it is happening now; it’s not just poor Mr. Regan. It’s not just my friends. It’s happening all over. They are turning affluent, white college students against their parents and against everything they have been raised to be. And not only that. In addition to turning them against it, they are being poisoned about the way they have been raised as promoting systemic racism, bias, homophobia, anti-LGBTQ attitudes, and all the other stuff that gets tossed into this perverse left-wing melting pot.

It’s not all teachers, either, by the way. You can never… They’re not all monolithic and you can’t incriminate an entire group. But I’m telling you, the multicultural curriculum crowd, this is where the root of all of this goes. Black Lives Matter, the rioting, the looting, it’s all rooted in hating America. It’s all rooted in false beliefs about the founding of America.

It’s all in converting white majority, affluent, college educated kids that their parents — and they, by extension — are to blame for the horrendous circumstances that everybody who’s not white faces in this country. And they’ve done a bang-up job. They’ve had two generations now to do this.

They’ve got your kids once they get to high school in various classes. Like, I can’t tell you how many history classes have been punted in exchange for current events in the news. And all that is, for however long that class lasts, is what an SOB Donald Trump is. That’s history class in many public and private schools in America today.

And the kids, of course, they liked it. It meant they didn’t have to study. They didn’t have to do anything. They were given the answers to the tests. It’s not just one place; it’s been happening all over the country. Everything for the advancement of the cause, you see.