In his final broadcast of 2020, Rush Limbaugh on Wednesday took exception to Joe Biden’s statement that America’s “darkest days” in the coronavirus pandemic were yet to come. 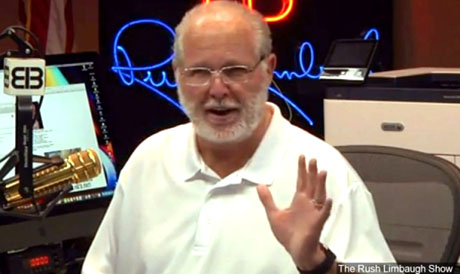 During a press briefing on Tuesday, Biden actually said: “The worst is yet to come in the fight against the coronavirus pandemic.”

Limbaugh noted: “The virus is what it is, but we adapt. We Americans have adapted to our problems. We’ve adapted to changing evolutionary things in our lives, in our country because of our freedom.

“Now, it’s under assault and under attack and we all know this. But I don’t believe our darkest days are ahead of us. I never have.”

Limbaugh noted that President Donald Trump’s four-minute speech on the covid relief “debacle coming out of the Congress — that should be studied in a master’s course in communication. It was clear, it was concise, it was well paced, it was powerful, it was on brand, and it was classic.”

It was the kind of speech, Limbaugh added, that “only an outsider could have made, and I really hoped that Trump would sit down and start ripping up the bill as Pelosi ripped up his speech” at the State of the Union address.

Limbaugh, 69, was diagnosed with Stage IV lung cancer in January. Trump awarded him the Presidential Medal of Freedom at February’s State of the Union address.

Limbaugh told his audience he hadn’t been expected to live to late December.

“I wasn’t expected to make it to October, and then to November, and then to December,” he said. “And yet, here I am, and today, got some problems, but I’m feeling pretty good today.”