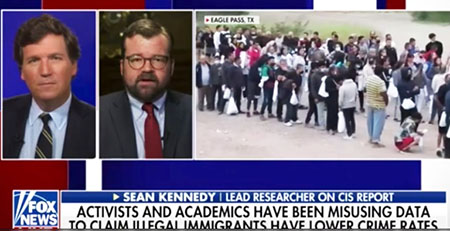 The Cato Institute had reported that the homicide conviction rate for illegal immigrants was 16 percent lower than that of native ​born Americans in Texas, 7.9 percent lower for sex crimes, and 77 percent lower for larceny. Cato’s report was promoted by The New York Times, Washington Post, NPR, and several other legacy media outlets.

CIS found Cato’s methodology and conclusion to be incorrect, the Post Millennial reported on Oct. 12.

In its report, “Misuse of Texas Data Understates Illegal Immigrant Criminality“, CIS noted that Cato’s error “was to treat as native-born anyone who had not yet been categorized as a legal or illegal immigrant.”

According to CIS researchers, the state of Texas groups American criminals in the same category as criminals with an unknown immigration status, making the number of illegal alien criminals much higher once that status is figured out.

“Native-born Americans are grouped with yet-to-be-identified immigrants in a catch-all category called ‘other/unknown.’ The number of unknowns shrinks during incarceration as Texas updates the figures upon identification of an inmate’s immigration status,” the CIS report reads.

The report then went on to display that the real numbers show illegal immigrant homicide convictions were significantly higher than the state rate:

Sean Kennedy, the lead researcher on the CIS’s report, joined Fox New’s Tucker Carlson during his Tuesday night show to announce the findings.

Left’s claim that illegals commit less crime than Americans is debunked added by Editor Two on October 14, 2022
View all posts by Editor Two →