Instagram has suspended the account of the wildly popular Libs of TikTok, which made its name by re-posting videos, typically without commentary, of woke social justice warriors espousing their views. 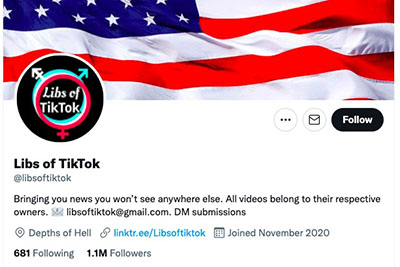 The Libs of TikTok account holder tweeted a message from Instagram declaring the account was suspended on May 27 and there was a 30-day window to “disagree with the decision.”

Instagram stated that Libs of TikTok’s account violated the social media platform’s Community Guidelines but didn’t elaborate on how the rules were broken.

Radio host Joe Pagliarulo noted: “You are posting unedited videos that are already available to the public. If they aren’t suspending those who make the originals, how can they suspend you? Am I missing something?”

Libs of TikTok, which has 1.2 million followers on Twitter, has been in the crosshairs of the Left for quite some time. Last month, Washington Post reporter Taylor Lorenz want so far as to dox the account creator, publishing the name, employer, religion and work address while whining that the account was “secretly fueling the right’s outrage machine” and had become “a powerful force on the Internet.”

Libs of TikTok has been repeatedly suspended by Twitter.

The leftist gestapo at Media Matters for America blasted Libs of TikTok in six press releases from April 1-18, starting with “Fox News is using the ‘Libs of TikTok’ Twitter account like a wire service for anti-LGBTQ attacks.”

Florida Gov. Ron DeSantis’ press secretary Christina Pushaw, a fan of the account who has publicly defended it, told Fox News Digital: “Let’s be clear: Libs of TikTok, as the name suggests, simply re-posts content that liberals voluntarily and publicly share on social media. The fact that Instagram has no problem with the liberals whose bizarre, often inappropriate and disturbing videos that Libs of TikTok re-posted, but they suspend her for drawing attention to those liberals, appears to be another instance of Big Tech censoring those who expose the absurdity of radical progressivism,” Pushaw told Fox News Digital.

“Big Tech has a tendency to censor those who challenge Silicon Valley dogma, but we hope this was an honest mistake on Instagram’s part, and they will restore her account,” Pushaw continued.

Radio host Tim Young, who has roughly 600,000 followers between Twitter and Instagram, said that social media platforms are obviously biased against conservatives.

“You never hear about major liberal or Democratic accounts being suspended on social media, only conservatives, which really is the tale of the tape on any story like this,” Young told Fox News Digital.

“I have personally been threatened in the past by a leftist account, reported it and nothing has happened – then seen instances where some of my followers will lose their accounts for using the wrong pronouns to describe someone,” Young continued. “There’s very clearly a left-leaning bias on social media, anyone with common sense – or even just any level of paying attention sees it – even Elon Musk has recently noted this bias.”

Left’s censorship brigade gets another scalp as Instagram suspends Libs of TikTok, WorldTribune.com

Left’s censorship brigade gets another scalp as Instagram suspends Libs of TikTok added by Editor Two on May 27, 2022
View all posts by Editor Two →