The FBI confirmed on Tuesday that it had received information prior to Jan. 6 that individuals were planning a “war” on the Capitol.

And the official timeline of the events in Washington, D.C. on Jan. 6, constructed by The New York Times through videos, shows protesters began breaching the perimeter of the Capitol a full 20 minutes before President Donald Trump finished his speech. 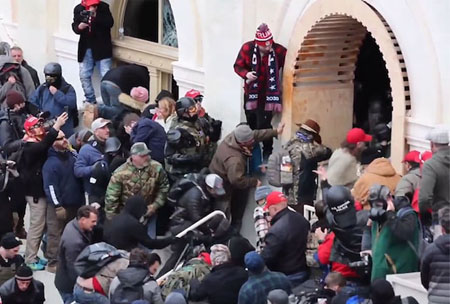 “This new evidence raises the first compelling question that remains unanswered,” John Solomon wrote for Just the News on Jan. 13. “How could Trump incite an attack that had already been pre-planned and was in motion before his speech ended?”

The FBI said that it had alerted Washington D.C. law enforcement through the joint terrorism task force alert system about plans to attack the Capitol. The bureau said it also “disrupted” the travel plans of some of the suspected instigators.

“We developed some intelligence that a number of individuals were planning to travel to the D.C. area with intentions to cause violence,” FBI Assistant Director Steven M. D’Antuono said. “We immediately shared that information, and action was taken.”

The New York Police Department is reported to have given the Capitol Police similar intelligence warnings of impending violence.

“The chief federal prosecutor in Washington declared Tuesday he is pursuing conspiracy charges, signaling the attacks on the Capitol involved multiple acts and multiple conspirators working in concert with each other,” Solomon noted. “The prosecutor talked about the planting of carefully constructed IEDs as one such act. In other words, there was pre-planning for some elements of last Wednesday’s chaos.”

A senior intelligence official told Just the News he has found no evidence that Trump, the White House or the National Security Council was alerted in formal intelligence briefings to the pre-warnings or suspicions of violence the FBI and NYPD have admitted they had.

Former NYPD Commissioner Bernard Kerik told Just the News on Tuesday it appeared the FBI and NYPD did their job in alerting the Capitol Police, but the evidence of a pre-planned attack would undercut the current narrative that Trump had incited a spontaneous insurrection.

“By all accounts, the FBI, NYPD and other authorities did exactly what they should have done by conducting interviews and making notifications to the Washington D.C. authorities,” Kerik said. “If these reports are true, you cannot incite a group that already pre-planned acts of violence by days or weeks, and it raises serious questions as to what security precautions were taken at the Capitol as a result.”

Another major question that remains unanswered, Solomon said, is: What did House Speaker Nancy Pelosi and the other leaders in Congress know — and when did they know it — about the possibility for violence and the Pentagon’s pre-attack offer to send National Guardsmen to reinforce the Capitol Police?

U.S. Capitol Police Chief Steven Sund, who resigned after the breach of the Capitol, told The Washington Post that security officials at the House and Senate rebuffed his early request to call in the National Guard ahead of a protest.

Sund alleged that House Sergeant-at-Arms Paul Irving was concerned with the “optics” of declaring an emergency ahead of the protests and rejected a National Guard presence. He says Senate Sergeant-at-Arms Michael Stenger recommended that he informally request the Guard to be ready in case it was needed to maintain security.

“Irving and Stenger have not talked publicly. But their account will be essential to the final effort to assign accountability for the glaring security lapses exposed last Wednesday,” Solomon wrote. “The key questions for both men is whether they warned Pelosi or Senate Leaders Mitch McConnell and Chuck Schumer about the violence concerns or consulted with the leaders about the idea of activating the Guard.”

Another troubling question that remains unanswered, Solomon said, is: “Were there facilitators inside the Capitol and outside it who instigated or enabled the attack to be carried out?”

South Carolina Democrat Rep. James Clyburn first raised this question. He noted that protesters were able to locate and penetrate his unlisted, unmarked office within minutes, raising the possibility they had inside help.

Video “shows officers and other people opening doors to rushing rioters and some people — purported by the filming cameramen to be leftist anarchists — smashing windows and urging protesters to jump into the Capitol,” Solomon wrote. “Identifying any insider help and the motives will be the final and perhaps most delicate task investigators face.”