The YPG Kurdish militia has agreed to pull out of a key town in northern Syria under a deal between the United States and Turkey. 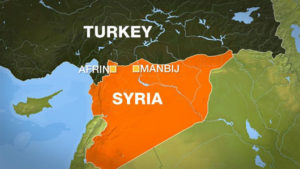 The YPG, or People’s Protection Units, announced on June 5 that it would pull its military advisers out of Manbij, a small but strategic town in central-north Syria, according to a report by Military.com.

The YPG said in a statement that its advisers had completed their mission to train the local forces, the Manbij Military Council, to defend the town which was re-taken from Islamic State (ISIS) in 2016.

The Manbij Military Council, a militia allied to the U.S.-backed Syrian Democratic Forces (SDF), said after learning of the U.S.-Turkey agreement that it would not accept a Turkish military presence in the town.

Turkish Foreign Minister Mevlut Cavusoglu said YPG fighters leaving Manbij would have to give up their weapons as part of a deal reached with the United States.

In a joint statement, the U.S. and Turkey said they had “endorsed a roadmap” that aims to “ensure the security and stability of Manbij.”

The YPG has been a key U.S. ally in the fight against Islamic State (ISIS) since 2014. Turkey considers the YPG a terror group tied to a Kurdish insurgency within its own borders.

The U.S. is estimated to have 2,000 forces stationed in north Syria.