Kuhner: Trump gets a B+ on his first 100 days; Speaker Paul Ryan? An F

The Mainstream Media’s verdict on President Trump’s first 100 days is that he has been a failure. The reason: He has failed (so far) to get any major piece of his legislative agenda passed. Healthcare, taxes and infrastructure — all of these big items remain stalled in Congress. Hence, liberals argue Trump is all talk, no action.

That is a lie.

Trump has achieved numerous accomplishments. In fact, he has laid the groundwork for a successful presidency that may rival that of Ronald Reagan. The media establishment refuses to admit this because their goal is clear: To demoralize Trump’s base and drive a wedge between him and his supporters. Don’t buy it. He has done more in three months than President Obama did in eight years. 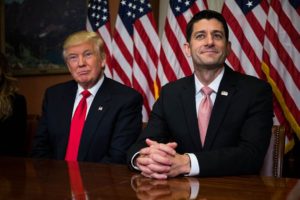 Trump has had a plethora of successes:

He has rolled back Obama’s job-killing climate change regulations; he has saved the coal industry from extinction; the economy is booming with higher growth and greater job creation, especially in manufacturing, construction and mining; illegal immigration has declined by over 70 percent at the southern border; criminal illegals are being deported in record numbers; America’s immigration laws are finally being enforced; conservative jurist Neil Gorsuch has been appointed to the Supreme Court; and the administration has put forth a budget plan that, for the first time in decades, slashes government spending across the board.

On trade and foreign affairs, the record is even stronger.

Trump has repealed the disastrous Trans-Pacific Partnership. He has announced to both Canada and Mexico that NAFTA either will be renegotiated or rescinded. The administration took a decisive first step in imposing a 20 percent tariff on Canadian softwood lumber imports.

The message is clear: America’s trading partners will no longer be able to take advantage of bad free-trade deals. Economic nationalism is in; globalism is out.

This may be his greatest achievement. The days of American subservience to the United Nations or the “international community” are over. Unlike the Obama years, the United States is no longer “leading from behind.”

Trump is not only a unilateralist, but he is rebuilding the hollowed out military. He also dropped the MOAB — known as the “Mother of All Bombs” — on ISIS in eastern Afghanistan, smashing the terror group’s elaborate network of underground tunnels.

He has stood up to North Korea’s Stalinist dictator, thereby reversing over two decades of naïve and failed U.S. diplomacy.

Yet, he has made mistakes — some of them costly ones. His decision to launch 59 Tomahawk cruise missiles against a Syrian airfield has caused a needless and major rift with Vladimir Putin’s Russia. Moscow is a natural ally in the war on ISIS; the U.S. and Russia together could easily crush the Islamic State in Syria. Trump’s actions, however, have ruptured any possible alliance (so much for the Left’s claim that Trump is Putin’s poodle).

The decision to back Ryancare — otherwise, known as Obamacare 2.0 — damaged Trump politically.

House Speaker Paul Ryan’s healthcare reform was not just bad policy. It was bad politics. Ryancare only had 17 percent approval. It was widely opposed by conservatives and Trump’s base. It cost the administration valuable political capital for a bill that was so unpopular, the GOP House leadership couldn’t even muster 200 Republican votes — never mind the 216 needed to pass it.

More importantly, Trump seems to have learned the wrong lesson from the Ryancare debacle. Instead of distancing himself from RINO Ryan, Trump is embracing him. Take his latest decision to cave on funding to start construction of the border wall. Ryan convinced him the Democrats would filibuster the spending bill if it contained $1.5 billion to kick-start building the wall, thereby causing a partial government shutdown. Senate Minority Leader Chuck Schumer called the border wall funding a “poison pill.” Trump has pulled back his request to start funding the wall’s construction, averting the supposed public relations nightmare of a government shutdown.

In exchange, over $3 billion will be allocated toward more border patrol agents and enhanced technology, such as drones, along the Mexican border. Ryan has told the president that the funds for the wall will be included in next year’s budget. Trump still insists the wall will be built. Time will tell.

But one seminal fact remains: Ryan has prevented, at least in the short term, the funding for the construction of a wall — a project that he and establishment Republicans virulently oppose.

Round one goes to Ryan and the globalist political elite.

Trump’s biggest mistake has been his alliance with Ryan. Unless there is a new House Speaker, Trump’s America First agenda will continue to face countless obstacles and entrenched obstructionism.

After 100 days, I grade the president a solid B+ maybe even an A-. Ryan, however, deserves an F. The sooner he goes, the better.