The Republican-controlled state legislature in Kansas has successfully enacted one of the most sweeping election integrity laws in the nation, lowered the age for concealed carry, and cut income taxes after overriding Democrat Gov. Laura Kelly’s vetoes of those measures.

The election integrity legislation bans ballot harvesting, prohibits electioneering, bans private funds from being used to administer elections, and prohibits the governor or secretary of state from making emergency changes to election laws. 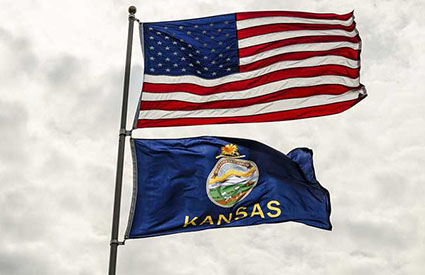 After Kelly vetoed the legislation, the GOP-led legislature voted to override the veto. The votes were 85-38 in the state House and 28-12 in the state Senate.

“They listened to folks back home,” House Speaker Tem Blaine Finch said of GOP lawmakers. “It’s because of, really, the grassroots in their communities telling them, ‘Hey, this is important to us.’ ”

GOP lawmakers said they are preventing fraud, arguing that the more people who handle absentee ballots, the more likely those ballots are to go missing or be altered. “Having someone cherry pick whose ballot gets picked up and turned in is not appropriate,” Finch said.

The legislature also overrode Kelly’s veto of a bill that creates a special concealed carry permit for 18-, 19- and 20-year-olds. The state already allows people 21 and older to carry concealed guns without a permit and adults can carry them openly.

The GOP also voted to override Kelly’s veto of legislation that will allow Kansas residents to claim itemized deductions on their state tax returns even if they don’t on their federal returns. The federal tax changes in 2017 discouraged itemizing, making some Kansans unable to itemize on their state returns.

Republican leaders realized their goal of tax relief for individuals and businesses that have been paying more in state income taxes because of changes in federal tax laws. Republicans said the measure will save Kansas taxpayers about $284 million over three years.

Republicans also overrode Kelly’s veto of a bill expanding the number of specialty license plates available to drivers willing to pay an extra fee. The votes were 86-37 in the House and 28-12 in the Senate.

The governor and other Democrats objected to a provision allowing a special plate featuring a coiled snake and a “Don’t Tread on Me” slogan which are featured on what’s known as the Gadsen flag.

The money raised by the $25 fee for the plate would go to the Kansas State Rifle Association.