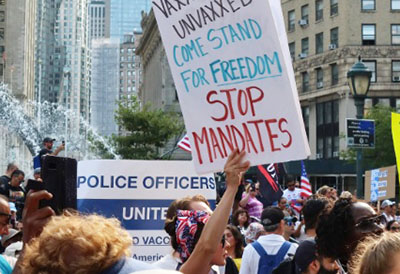 Judge Ralph Porzio ruled against the city, saying the mandate is unconstitutional.

The judge ordered the city to reinstate, with back pay, the more than 2,000 city workers who were fired for refusing to receive the vaccine.

In New York, Supreme Courts are the lower state trial courts while the top court in the state is the Court of Appeals, where New York City is seen likely to file an appeal to judge Porzio’s ruling.

The judge said that New York Democrat Mayor Eric Adams “made a different decision for similarly situated people based on identical facts” in his Executive Order No. 62 mandating the Covid vaccine for city workers.

There wasn’t anything in the record to “support the rationality of keeping a vaccination mandate for public employees, while vacating the mandate for private sector employees or creating a carveout for certain professions, like athletes, artists, and performers,” the judge wrote. “This is clearly an arbitrary and capricious action because we are dealing with identical unvaccinated people being treated differently by the same administrative agency.

“So, we just defeated the vaccine mandate for every single city employee — not just sanitation,” LaVeglia said in a video on the Twitter account NYCforYourself.

LaVeglia said the ruling extends to all public workers, including the New York fire department, the police department, and the Department of Corrections.

“For all the brave men and women who have been our first responders and have been brave through all this are now free, and you should be able to go back to work,” he said.

George Garvey and 15 others who worked at the New York City Department of Sanitation filed the lawsuit on July 20 after they were terminated for failing to comply with the mandate.