A Washington, D.C., district court judge issued an order on Thursday calling on the Biden administration to agree that both civilian and active-duty military plaintiffs will not be fired while they await a ruling on religious exemptions to the mandated Covid vaccination. 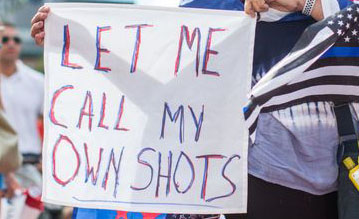 “None of the civilian employee plaintiffs will be subject to discipline while his or her request for a religious exception is pending,” read the order from District Judge Colleen Kollar-Kotelly, Fox News reported.

The judge also asked Team Biden to agree that “active duty military plaintiffs, whose religious exception requests have been denied, will not be disciplined or separated during the pendency of their appeals.”

Twenty plaintiffs have sued Joe Biden and members of his administration in their official capacity over the Sept. 9 executive order mandating vaccines for federal employees, according to civil action filed Sunday.

“The Biden administration has shown an unprecedented, cavalier attitude toward the rule of law and an utter ineptitude at basic constitutional contours,” the plaintiffs’ attorney, Michael Yoder, said in a statement to Fox News.

“This combination is dangerous to American liberty,” Yoder continued. “Thankfully, our Constitution protects and secures the right to remain free from religious persecution and coercion. With this order, we are one step closer to putting the Biden administration back in its place by limiting government to its enumerated powers. It’s time citizens and courts said no to tyranny. The Constitution does not need to be rewritten, it needs to be reread.”

Meanwhile, Gov. Ron DeSantis on Thursday announced that Florida has filed a lawsuit against the Biden administration to challenge the Covid vaccine mandate for federal contractors.

“We think the state of Florida has standing,” to file the lawsuit, DeSantis said. “We also know businesses that we’re going to work with to contest” Biden’s order.

The governor also said Florida has “a responsibility at the state level to do whatever we need to do to protect Floridians from mandates that could result in them losing their jobs.”