In eight cases before her, the former D.C. District Court judge and current nominee for the Supreme Court, “heard horrifying details of ‘sadomasochistic’ torture of young kids — including ‘infants and toddlers’ — yet challenged the disturbing evidence presented by prosecutors and disregarded their prison recommendations,” the New York Post reported on April 2. 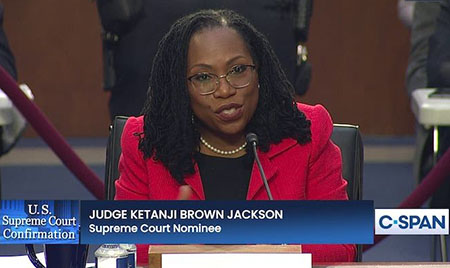 Jackson even apologized to some of the child-porn defendants for having to follow the statutes, which she called “substantially flawed,” the report noted.

“Over and over, the records reveal, Jackson made excuses for the sex fiends’ criminal behavior and cut them slack in defiance of investigators and prosecutors — and sometimes even probation officers serving her court — who argued for tougher sentences because the cases were particularly egregious or the defendants weren’t remorseful,” Paul Sperry wrote for the Post.

The Senate will vote on her confirmation in the coming week.

The Post detailed some of the cases Jackson, an Obama appointee, tried from 2013 to 2021:

Jackson gave Downs the statutory mandatory-minimum sentence of 60 months, which was short of the nearly six years prosecutors asked for. In addition, Jackson gave Downs credit for time served starting from when he was first incarcerated in October 2018, so technically she gave him only 38 months, or a little over three years. Downs is scheduled for release in December.

• In her 2013 sentencing of Wesley Keith Hawkins, who was busted posting videos on YouTube of boys as young as 11 being raped by men, Jackson gave the young gay black man essentially a slap on the wrist — and then apologized to him for it. Instead of the two years of prison prosecutors asked for, she gave him just three months and sent him to a lower-security facility and even arranged special protections for his safety normally afforded to cops sent to prison.

“I am not persuaded that two years in prison is necessary,” Jackson ruled, arguing that such a sentence does not account for mitigating factors, including “Mr. Hawkin’s … future potential.” Jackson added that “youth and inexperience may have clouded your judgment” and dismissed concerns he was a risk to reoffend. “There’s no reason to believe you are a pedophile or that you pose any risk to children,” Jackson opined. “So It’s not necessary to incapacitate you in order to protect the public.”

“She’s clearly not a mainstream judge. After she heard details of sex torture of young kids, including babies, she nonetheless disregarded the official sentencing guidelines and prosecutors’ recommendations to give rock-bottom sentences in eight of eight cases,” told the Post, adding that she seems “more concerned about the well-being of pedophiles than the safety of your children — and thanks to her, they may be living in your neighborhood right now.”