Gregg Phillips and Catherine Engelbrecht of True the Vote were taken into custody in a Houston courtroom on Monday for refusing to reveal one of their sources in the scandal involving China-linked election firm Konnech.

Federal Judge Kenneth Hoyt ordered U.S. Marshals to detain Engelbrecht and Phillips without bond for contempt of court due to their refusal to release the name of a confidential informant in a civil case filed by Konnech against Engelbrecht and Phillips. They were ordered held for a day or more or until they bring forth the information the judge said they are withholding.

“Phillips and Englebrecht declined to name the man, claiming their hands were tied because he is an FBI informant, according to a person who attended the hearing.” Reuters reports. “They were escorted out of the courtroom by U.S. Marshals, the person said.”

Emerald Robinson noted in an Oct. 30 substack post: “The judge in the case, Kenneth Hoyt of the U.S. District Court for the Southern District of Texas, has gone to extraordinary lengths to protect Konnech from legitimate scrutiny. First, Judge Hoyt granted Konnech’s request for a temporary restraining order against Engelbrecht and Phillips — which prohibits them from accessing, or attempting to access, Konnech’s computers or disclosing any of the company’s data. Then Hoyt demanded that True The Vote disclose the name of the person who helped them access Konnech’s data in the first place.”

Konnech’s CEO, Eugene Yu, was arrested on Oct. 4 for illegally storing the personal data of American election workers on servers in China.

“Judge Hoyt has simply proceeded in Konnech’s civil case this week as if none of this has happened,” Robinson noted.

Kanekoa News on substack has reported extensively on Konnech’s ties to communist China and on the FBI’s concealment of those ties.

According to a press release that appeared on Oct. 4 on the True The Vote website, Judge Hoyt went so far as to issue a gag order against Phillips and Engelbrecht even discussing the litigation:

“True the Vote was sued last month by Konnech to try to silence our organization, including obtaining an ex-parte TRO, conducted in secret so that True the Vote had no opportunity to contest it. This TRO limited True the Vote’s ability to speak on the litigation. Today Konnech CEO Eugene Yu was arrested based on alleged evidence of the very activities he and his organization attempted to suppress. Konnech was assisted by many reporters who unblinkingly accepted their now discredited claims as fact, and simply repeated them.”

Phillips said that the revelations from the Konnech case will be one thousand times greater than what was revealed in Dinesh D’Souza’s documentary “2000 Mules”. 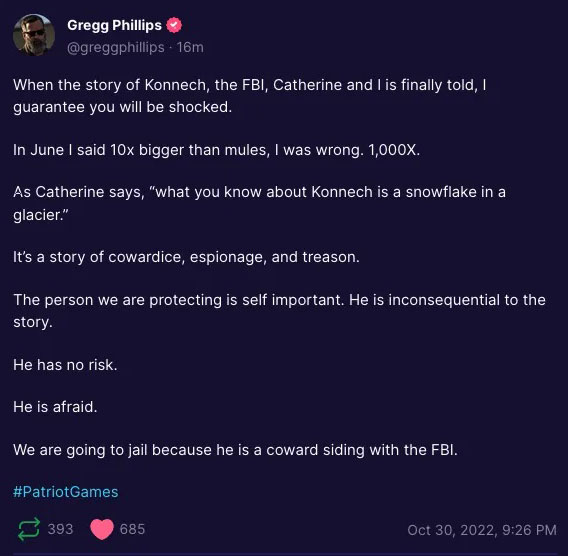