She’s back: Jeanine Pirro calls for ‘behind the bars justice’

Unless there is “behind the bars justice” for those who engineered the Trump-Russia collusion hoax “then it is a blueprint for a future effort to overthrow the government,” Jeanine Pirro said on March 30 in her return as host of the Fox News show “Justice with Judge Jeanine”. 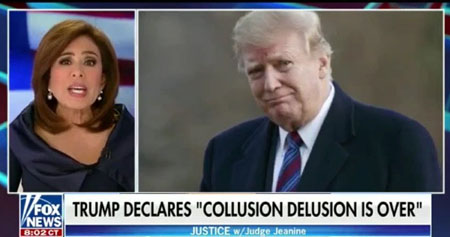 Pirro was off the air for two weeks amid outrage over comments she made on whether Rep. Ilhan Omar was more loyal to Muslim Sharia law than to the U.S. Constitution. Fox News joined several other outlets in condemning the remarks.

In her opening statement on March 30, Pirro named former Attorney General Loretta Lynch, former FBI Director James Comey, former FBI Deputy Director Andrew McCabe and former FBI agent Peter Strzok as those that should face scrutiny for setting up a special counsel probe that she likened to a coup.

“When someone lies to you, you just say, ‘Don’t worry about it. I’ll get over it,’” Pirro said. “Well, that’s not how our system works. There has to be accountability. There has to be a consequence because the president himself said, ‘This should never happen again.’ I can guarantee you it will happen again unless we make an example of the traitorous, treasonous group that accused Donald Trump of being an agent of the Russian government. And as they spewed their hate, I want to know who did the unmasking? Who did the leaking?”

Pirro continued: “And if we don’t have a consequence, if the highest level of government are not held responsible for this then it is a blueprint for a future effort to overthrow the government. Don’t be satisfied with the Mueller report. This is bound to happen again because these arrogant, lying, condescending, leaking haters of you and me and the America that doesn’t have power are going to do it again unless we stop them. And the only way to stop them is with justice – true justice, and that is behind the bars justice.”

Pirro asked Giuliani: “What we’ve got is this report not only exonerated the president, it indicted the FBI, the DOJ, and there was a time when you and I would be talking and we’d say ‘Jeff Sessions is the Attorney General. Nothing’s gonna happen.’ Will something happen now?”

Giuliani responded: “First of all, I know you agree with me. The people it indicts are the corrupted politicians at the top of the FBI and DOJ. No field office of the FBI is implicated in this, no agent who is sacrificing his life to protect us. It’s a bunch of these phony politicians at the top who corrupt themselves because they want to suck up to whoever’s in power. I would describe Comey that way, a whole bunch of other people like that. McCabe, his wife running for office, getting millions of dollars from Hillary. These are suck-up politicians. They’re not FBI agents like you know who are police officers. The guys who go out and arrest people, put their lives on the line. My God, their hands would shake if they had to do that.”

Giuliani added that “I believe over the next six months we’re going to uncover evidence that what they did here was criminal. This whole thing of collusion isn’t true. I was with Donald Trump for the last five months of the campaign. He didn’t ever talk to a Russian, he had nothing to do with a Russian.”