Whether out of mounting frustration or a sense that constantly ratcheting up the pressure is the only way to impose their will, accredited cultural leftist figures are not hesitating to publicly denounce the little people who stubbornly cling to their personal religious beliefs on the coronavirus jab in flagrant defiance of what their proclaimed overseers have decreed is good for them.

The Roman Catholic archbishop of the U.S. military dealt forced-vaccine zealots a crushing blow on Oct. 12 when he simply restated what his Church had proclaimed all along on the issue. “No one should be forced to receive a Covid-19 vaccine if it would violate the sanctity of his or her conscience,” Archbishop Timothy Broglio said in a statement. 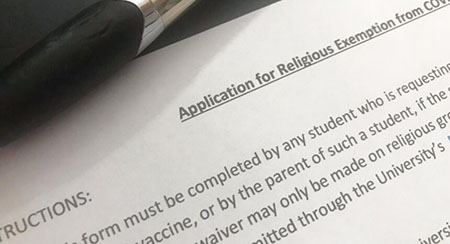 Lost amid the monumental propaganda campaign to promote the vaccines earlier this year was the fact that the Catholic Church, the biggest denomination of the largest religion in the West, Christianity, having okayed the vaccines despite their controversial development ties to abortion, at the same time steadfastly declared that no one should be compelled to get the jab against their will.

That latter part has naturally been completely downplayed by the dominant media and the entirety of the ruling establishment across the board.

Dr. Anthony Fauci, chief medical adviser to Joe Biden, especially likes to parrot the intentionally confusing talking point. “There are precious few religions that actually say you cannot” get vaccinated, he stated on Oct. 3. Again, his words leave out any reference to official religious backing for personal conscience refusal.

But this game’s not working anymore, and so it is time to change tack. Persuasion has run its course. Now that more Americans are insisting that their personal religious beliefs be respected, a crackdown on exemptions is inevitable if the vaccine mandate machinery is to continue to operate.

Michael Hiltzik, a business columnist at The Los Angeles Times, on Oct. 7 noted the disturbing scent of religious freedom in the air, and offered his solution:

Religious exemptions from vaccine mandates are sustainable only if very few people use them. Vaccination is a collective challenge, a civic obligation of the most immediate kind. For highly contagious diseases, it’s only effective when nearly everyone participates. One person’s choice to refuse vaccines can get another person killed.

Here we have once again an appeal to a jarringly elastic notion of “the common good” to force Americans to act against their consciences. Edelman seems to understand that religious exemptions cannot be quashed entirely, so his scheme is to make them so impossible to get that his fellow citizens will give up trying:

[University of California Hastings College of Law professor and rabid pro-vaccine activist] Dorit Rubenstein Reiss has proposed letting believers and nonbelievers alike claim a general exemption for personal belief — but making it very hard to get. This might look like forcing people to sit through extensive education programs, write a letter explaining their objections, and get it notarized by a notary public. The goal would be to make it such a pain in the ass that only the most die-hard resisters would go to the trouble, while taking religion out of the equation. There is evidence that this approach can work. A 2013 research paper sorted states according to whether their exemption procedures were easy, medium, or difficult. The authors found that the rate of vaccine opt-outs in the easy states was more than double that of the difficult states.

The jumping-through-a-million-hoops obstacle course is the easiest way to get around awkward conversations about constitutional rights. Popular Massachusetts blog Turtleboy Sports on Oct. 13 detailed the actions at Mass General Brigham Hospital.

In June, the hospital enacted its vaccine mandate policy, which would go into effect on Oct. 15. For those sincerely opposed on religious grounds, good luck keeping your job:

Employers like Brigham and Women’s have set up religious review boards full of likely non-religious people to decide who is and isn’t properly religious enough to avoid vaccination, and the process of deciding is completely arbitrary.

One employee who managed to get an exemption, although a tenuous one at best, told the site:

The religious exemption process is a joke and has changed apparently from the day where a simple few sentences sufficed. The standard is completely different now and they too are “playing God“ deciding who wrote the better exemption and who is holier. Employees who had religious exemptions for 40 years for vaccines are now being denied. They refuse to give us answers as to what protocol they follow. I was one of the very few who was approved, but even my approval was worded shady. My exemption for COVID is worded “for current vaccination deadline“ where as the flu exemption is worded “ 2021-2022 flu season.” They also stated in one of many coercing and harassing emails that there is no appeal process.

The most vexing feature of the entire effort is the captive audience authoritarianism exemplified by these review boards. Employers now get to decide whether or not your personal religious beliefs are valid or bogus.

The astonishing arrogance is meant to accentuate a crucial point of the entire vaccine mandate rollout. Not all opinions are equal. Theirs are right, and yours are wrong.

This is being publicly stated as well. Perhaps Americans should look to the prison nation of Australia to get a feel for the corrosive mindset making a beeline for these shores.

Nyadol Nyuon is a “lawyer and human rights advocate” of Sudanese descent who was born in an Ethiopian refugee camp. She has risen to become a leading African-Australian social justice warrior Down Under. That is quite the comfortable position in a nation awash in wokeness. Here is what she wrote in an Oct. 13 column published by The Sydney Morning Herald titled “Anti-vaxxers hide privilege behind language of oppression”:

The climate change debate is a sad example of the consequence of the artificial invention of balance, which is a debating approach or process that treats ideas or information as equal even when tangibly the information should not be treated as such.

If our ruling establishment elites have their way, your personal religious beliefs, which you plebes have the temerity to present as of equal value to the settled silence, will be effortlessly tossed aside as the nonsensical gibberish thwarting the common good that they are.