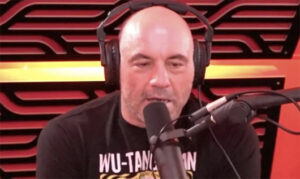 Podcaster Joe Rogan has announced that he’s feeling better but is still going around with a long face and is feeling a little hoarse after recovering from his illness with a concoction of drugs prescribed by his doctor.

“I’m just about ready to get back in the saddle, though. We’re gonna hit things hard when I come back, at a full gallop. The mane thing is we’re gonna ride this thing out and trot out our new stable of guests real soon here. . . .”

“We’re on the home stretch and we whipped this thing pretty good.”

Rogan added that he was going to have to “pony up” a little extra to pay for his treatment this month, but it shouldn’t be a problem as Spotify bet a lot of bucks on him as their winning horse.

Ivermectin user Rogan says he’s feeling ‘a little hoarse’ but almost ‘back in the saddle’ added by Editor One on September 9, 2021
View all posts by Editor One →