Elders and residents in the Egyptian town where Islamic State (ISIS) terrorists killed at least 305 people in a Nov. 24 attack on a Sufi mosque had been warned in advance by ISIS, a report said.

Security officials in Bir Al-Abed, located near the city of El-Arish in North Sinai, said ISIS operatives delivered the warning a few days before the Nov. 24 attack on the Al-Rawdah Mosque. 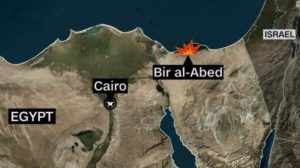 The jihadists delivered threats against cooperating with local security forces and performing Sufi rituals, The Associated Press reported. ISIS considers Sufis to be heretics who should be killed.

As many as 15 million Egyptians belong to Sufi orders “which hold sessions with chanting, poetry readings and ritual dancing meant to draw the faithful closer to God,” Israel’s Arutz Sheva noted.

Mohammed Ibrahim, who lives in Bir Al-Abed, said terrorists had warned residents not to collaborate with security forces. The warning, he told AP, followed the detention three weeks ago by villagers of three suspected terrorists who were handed over to security forces.

“They threatened him not to hold Sufi gatherings, and last week, they came on motorbikes and asked residents not to participate in Sufi rituals,” Darwish told AP.

ISIS jihadists have targeted Sufis before. Last year, they beheaded a leading Sufi religious figure, Sheikh Suleiman Abu Heraz, who was believed to be over 90-years-old. They posted photos of the killing online.

In the January edition of an ISIS online magazine, a figure purporting to be a high-level official in the group’s Sinai affiliate vowed to target Sufis, accusing them of idolatry and heretical “innovation” in religion, warning that ISIS will “not permit (their) presence” in Sinai or Egypt.