The U.S.-led coalition and anti-Assad rebels joined forces to repel an Islamic State (ISIS) attack on a partnered base in southern Syria on April 8, the Pentagon said.

ISIS initiated the attack on the at-Tanf garrison with a vehicle bomb and between 20 to 30 jihadists, some wearing explosives vests, officials for the Combined Joint Task Force Operation Inherent Resolve said. 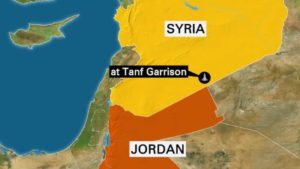 “Coalition and partnered forces defended against the ISIS attack with direct fire before destroying enemy assault vehicles and the remaining fighters with multiple coalition airstrikes,” the Pentagon said in a statement.

The assault on the Tanf base was one of two attacks launched by ISIS near the Syria-Iraq-Jordan border on April 8.

At least two U.S.-backed rebels were killed and scores wounded in the Tanf battle, a rebel source said.

ISIS also staged a suicide attack on a convoy of rebel fighters from the Western-backed Osoud al Sharqiya rebel group, who had sent reinforcements from their outpost near the Rukban refugee camp. Two of the fighters in the convoy were killed in the ambush.

Osoud al Sharqiya, one of the main groups in that area fighting ISIS, is part of the Free Syrian Army of rebels financed and equipped by a Western coalition.

Islamic State-affiliated Amaq news agency said two suicide attacks were conducted by its fighters near Tanf on “positions of Syrian groups supported by America.” It gave no details.