An alliance of jihadist groups who have pledged allegiance to Islamic State of Iraq and Levant (ISIL) have launched terror operations near Israel’s border on the southern Golan Heights, a report said. 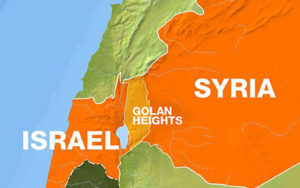 The video shows the jihadists “fighting under the banner” of ISIL advancing on rebel positions in Syria’s Daraa province, the report said.

While there is no explicit threat against Israel in the video, ISIL is said to be using heavy artillery weaponry, including confiscated tanks, to bolster its influence in the region adjacent to Israel’s northern border.

Israeli officials said that intelligence-gathering activities within the IDF’s Northern Command have increased and are tracking “the capabilities and intentions of every armed group in southern Syria.”