Iran’s rial plummeted to an all-time low on July 30 as the U.S. prepares to reimpose sanctions on the Islamic Republic on Aug. 6. 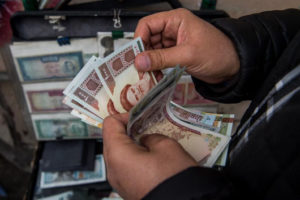 According to foreign exchange website Bonbast.com the Iranian rial traded at 119,000 to the U.S. dollar on July 30, as demonstrations and strikes by truck drivers spread nationwide.

Iran’s currency, which fell through the 100,000 per dollar level for the first time on July 29, has almost halved in value since early May.

Iran has seen high demand for dollars among its people who fear the effects of sanctions after President Donald Trump withdrew the U.S. from the Iran nuclear deal on May 8.

Iran’s central bank said in a statement on state television: “The recent developments in the foreign exchange and gold markets are largely due to a conspiracy by enemies with the aim of exacerbating economic problems and causing public anxiety.”

Meanwhile, Iranian authorities in recent days have arrested dozens of people for what a judiciary spokesman called “economic disruptions.”

Some of those arrested were “accused of buying ordinary Iranians’ identification cards and using them in faked trade deals that allowed them to receive dollars from the central bank at the preferential rate,” the Wall Street Journal reported.