Lizards with atomic-sensing properties have been dispatched from the West to spy on Iran’s nuclear facilities, a senior military adviser to supreme leader Ayatollah Ali Khamenei claims. 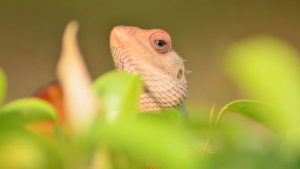 The ‘ reptiles “attract atomic waves” and are being used “to find out where inside the Islamic Republic of Iran we have uranium mines and where we are engaged in atomic activities,” Hassan Firouzabadi told the state-run Iranian Labour News Agency.

It is not the first time Iran has accused the West of using animal spies to gather information about its nuclear activities.

Firouzabadi, the former chief of staff of Iranian Armed Forces, said Western spy agencies have “failed every time” in such attempts.

A 2008 report by the Iranian newspaper Etemad Melli said two “spy pigeons” were sent to gather intelligence on Iran’s uranium enrichment plant in Natanz. One of the birds was captured not far from the facility, the report said, adding that the bird had metal rings, strings and other suspicious features attached.

In 2007, Iran’s daily Resalat reported that 14 “spy squirrels” were busted near the Iranian border. The report said Western intelligence had outfitted the offending squirrels with espionage equipment, including navigation tracking, bugging devices and a camera.

In 2015, security officials for Iran-backed Hamas reported that a dolphin equipped with “video cameras” was captured off the Gaza coast. According to the Palestinian newspaper al-Quds, Hamas claimed the dolphin was sent by Israel and was fitted with a weapon that could fire arrows.

Lebanese media in 2016 reported on the case of a “spy vulture” from Israel that was captured in southern Lebanon. Local media called it a “spy” bird as it reportedly carried transmitter equipment. Israel said the vulture was from a nature reserve and asked for it back.