The FBI on July 31, 2016 launched its investigation into the Trump campaign, relying heavily on the infamous and unverified dossier authored by ex-British spy Christopher Steele. 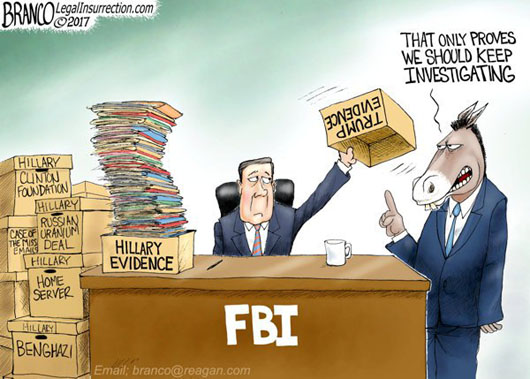 To date, no Trump associate has been charged for collusion with Russia – the ostensible reason the investigation started.

President Donald Trump tweeted on July 29: “There is No Collusion! The Robert Mueller Rigged Witch Hunt, headed now by 17 (increased from 13, including an Obama White House lawyer) Angry Democrats, was started by a fraudulent Dossier, paid for by Crooked Hillary and the DNC. Therefore, the Witch Hunt is an illegal Scam!”

Anti-Trump FBI agent Peter Strzok kicked off the investigation “based on hearsay from an Australian diplomat who shared a drink in London” with Trump campaign volunteer George Papadopoulos, Rowan Scarborough noted in a July 30 report for The Washington Times.

The drink in London may have started the inquiry, “but it was the Democratic Party-orchestrated dossier that would fuel it with an unsubstantiated tale of an ‘extensive conspiracy’ between Trump and the Kremlin,” Scarborough wrote.

Steele, like Strzok, “privately expressed a strong dislike of Trump – so strong that the former British spy hoped his gossipy memos would end the candidacy.”

Strzok’s team used Steele’s dossier to obtain a yearlong wiretap on Trump campaign associate Carter Page. The wiretap allowed the FBI to spy on electronic communications during and after the campaign.

In October, Page said on MSNBC’s “All In With Chris Hayes”: “When the truth comes out, when Speaker Paul Ryan says the FISA warrant, the details about the dodgy dossier, and what happened and all the documents around that is going to be released, that’s what I’m really excited about and I think the truth will set a lot of people free.”

The majority Republicans of the House Permanent Select Committee on Intelligence ended their Russia investigation last spring with no finding of collusion.

If Democrats regain control the House in the midterm elections, Rep. Adam Schiff of California, the House intelligence committee’s chairman in waiting, likely would restart the investigation and call a stream of Trump witnesses. His staff continues to interview people privately, Scarborough’s report said.

Schiff “is a big fan of Steele’s” and read parts of his dossier into the official congressional record, Scarborough noted.

“It is … another tragic milestone for this Congress and represents yet another capitulation to the executive branch,” Schiff said in March when Nunes finished his report. “By ending its oversight role in the only authorized investigation in the House, the majority has placed the interests of protecting the president over protecting the country, and history will judge its actions harshly.”

The dossier accused four people of collusion: the president, Page, Paul Manafort and former Trump attorney Michael Cohen. All deny the charges and none to date has been charged with collusion.