The God of Abraham, Isaac and Jacob and His Ten Commandments were acknowledged in unrelated developments in California and Illinois

Over the objections of the ACLU and 19 outspoken critics at a debate on the issue, the Bakersfield City Council on June 5 approved a proposal to add “In God We Trust” decals to both police and fire vehicles.

“I love the motto,” said Councilmember Jacquie Sullivan, according to The Bakersfield Californian. “It’s meaningful. It’s powerful. Those words are intended to encourage.” 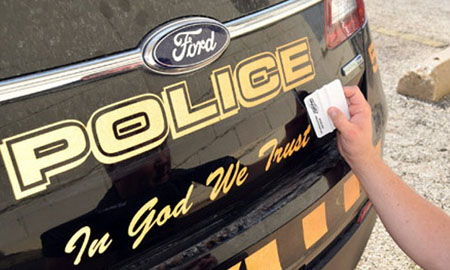 Sullivan’s non-profit organization, In God We Trust America, has offered to pay for the decals.

Lawyers for the American Civil Liberties Union were on hand at the Bakersfield City Council meeting to oppose the proposal.

“Unlike God, police officers are fallible,” ACLU lawyer Jordan Wells said. “Their conduct should be scrutinized by the public, and when they overstep their authority, we must insist on accountability.”

“Displaying ‘In God We Trust’ — the official motto of the United States — on Bakersfield Police Department cars is a testament to each officer’s commitment to upholding the rule of law and defending the City of Bakersfield and its residents,” McCarthy said in a statement to The Californian.

City council members in nearby Delano approved a proposal last month to add “In God We Trust” to police vehicles. The city of Shafter, which borders Bakersfield, is expected to vote on a similar proposal later this month.

Meanwhile, an Illinois bishop said that no lawmakers who supported the state’s Reproductive Health Act, which repeals several restrictions on abortion, will be able to receive communion for “promoting the abominable crime and very grave sin of abortion.”

Illinois House Speaker Mike Madigan and state Senate President John Cullerton, both Catholics who pushed for the legislation, have been banned from partaking in the sacrament of communion at Mass in the Springfield diocese, Bishop Thomas Paprocki said.

The bill, which passed the Illinois legislature on May 31, is awaiting the governor’s signature. The bill removes waiting periods, spousal consent and criminal penalties for doctors who perform abortions.

“We have to be clear that you cannot be pro-abortion and be a Catholic in good standing,” Paprocki told the National Catholic Register. “And that’s what this is really intended to do.”

Madigan said he was notified by Paprocki that if he backed the bill he would not be able to take communion, but he backed it anyway, adding in a statement the bill is “a recognition that women across Illinois deserve access to health care without intrusion from the government.”

The Thomas More Society, a pro-life group, told Fox News the bill will make Illinois the “abortion capital of America.”

In a similar move earlier this year, Catholic leaders called for New York Gov. Andrew Cuomo to be excommunicated for his “flagrant celebration of a pro-abortion bill,” but the Democratic governor brushed off the criticism: “I’m not here to legislate religion.”