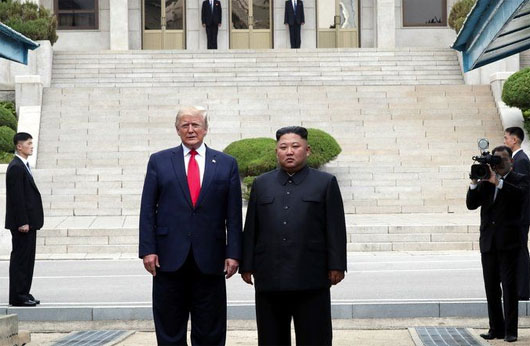 Trump and Kim then walked into South Korean territory together and were joined by South Korean President Moon Jae-In.

WorldTribune.com columnist Don Kirk had suggested such a photo-op in a column on June 27.

“It’s a great day for the world and it’s an honor for me to be here,” Trump said. “A lot of great things are happening.”

Kim said Trump stepping into North Korea was “a very courageous and determined act” that “means that we want to bring an end to the unpleasant past.”

After spending about 50 minutes in talks behind closed doors with Kim, Trump said the two sides had designated teams to resume stalled nuclear negotiations within weeks.

In a June 27 report for WorldTribune.com, columnist Donald Kirk wrote: “It would be so much easier for everyone if Kim would just do the unexpected and and meet Trump on the North-South line at Panmunjom on Sunday. They wouldn’t have to talk a whole lot. No need to sign another useless statement. All the world would notice was that they hugged one another befitting Trump’s claim of the depth and warmth of their special relationship.”

“With no solution in sight, Kim coming on down to embrace Trump at Panmunjom would still make for a great photo-op – a lot better than signing some empty document,” Kirk wrote.